Yelling and listening, it's not the same.

The problem with having lots of children is learning to communicate with each one.  Each child is different, with different needs and abilities, desires and problems; learning to converse with one does not guarantee understanding the others, in fact I think it can be said that the very function of communication is in the learning and understanding of those differences.

With ten children the differences are profound.  It’s as if I have to learn a new language for each one.  The nuances of need, the shades of desire and motivation, the colors of attitude and outlook each requires a new level of understanding and translation.   Even the differences between the boys and girls are problematic, (now that’s an understatement) creating misunderstanding, confusion and outright divergence in thought and action.  The only solution is in the deep and abiding knowledge of those differences and the willingness to move beyond self-interest and preconceptions derived from one’s own personality and life experience.  In other words I had to learn to listen, and that means being empathetic to someone other than myself, not an easy task. 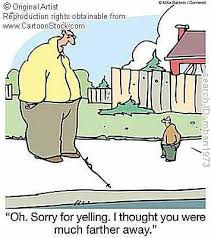 Can you imagine the difficulty when language is also a barrier?  I spent a couple years in England and often tell people, actually anyone who is in earshot, that I did in fact have to learn a different language, I had to learn English.  The differences may seem simple but a misspoken word can cause serious consequences.  After a satisfying dinner in Bristol England I proudly proclaimed that I was “stuffed”, and promptly learned that I couldn’t possibly be pregnant nor should I use that kind of language again, especially in the presence of children and women.

One simple word, one misunderstood idiom and, friends become enemies companies sue and worlds go to war. A simple mistake can have lasting and detrimental consequences just because we don’t understand the differences in how we communicate.
I must say, I’m grateful for a forgiving family who not only tolerates my in-sensitivities but helps me to sharpen my skills of not only what to say but how to say it.   It is within the loving family that most of us learn how to speak, what to say, what not to say and what words work with each individual, forming the basis of a meaningful relationship.  From family to friends, from friends to colleagues and from there the world learns to smile instead of frown, wave instead of fight.

Communication is an overused word; it can mean anything from a wife’s complaint toward a caring but nonverbal spouse, most men know and fear the phrase “we have to talk”, to the overall media conglomeration of all that is TV, internet, radio and print.   Communication really is everything and nothing takes place without it.  We have non-verbal styles, body language, emotional cues etc…and putting them all together constitutes our ability to understand and be understood.  It sounds so simple but in the end most of us are really not that good at “communicating” and find ourselves in utter and complete confusion over what we think we’ve heard or what we’re trying to say being not what we really wanted to hear or speak.

We all need to take more time to think about what we’re trying to convey, giving more credence to the needs of the listener.  Let’s be honest, what good is speaking if no one understands what’s been said?  With the exception of the legal and political upper class who take great pride in their selfish pontificational (I just made up that word) rhetoric, most of us really want to be understood.  So let’s try to know our audience, let’s learn about each other, especially those we love the most and perhaps then we can start solving some of the more complex issues that face our families and our nation and our world.
Posted by politicaldad at 9:52 AM