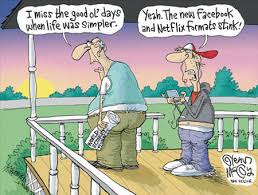 The other day when I was working out at the gym, yes I work out, it may not show but my heart thanks me.  As I was saying, at the gym I noticed all these people running, stepping, pumping weights, some were shooting hoops and others were trying to put their bodies into very unnatural positions,  using yoga techniques and a few were just milling around as if they couldn’t decide what to do.  It hit me; I stopped peddling, pulled the earbuds out of my auditory canals and just sat there.  What an incredible life we have.

Over 100 years ago our ancestors, my grandparents were born into a world completely different than the one we have now.  100 years before that there was a difference but not like the differences we’ve seen or currently experience.  It’s as if time is accelerating, everything is moving faster, and changes come more often and with greater intensity.
In the “old days” people lived on country roads and could only see the changes if it happened within their eyesight.  People had the time to think and ponder, to digest the vicissitudes and fluctuations of life, like waiting for a faraway storm as it slowly ebbed and flowed over the distant plains.  They had time to baton down the hatches, run the chickens into the coop, herd Bessie the milk cow into her stall and close the barn door long before the storm released its torrential drops of misery and woe. Now we're lucky if we see it coming at all before the devastation of change hits us in the back of our heads

In the old days, people lived healthy and productive lives, breathing fresh air and ingesting wholesome, home grown foods.  They didn’t need a gym they worked on the farm, their muscles strained and taught from years of vigorous labor, only to die young from the rampant hardship of menial labor and unchecked diseases that ravaged entire populations.  The risk of infection always present, the smallest cut could turn gangrenous, putrefying the flesh, poisoning the blood, slowly but ever so surely, letting death be the reward, but only after a painful and lingering bout of reality.

In the old days, cities were filled with disease, filth, trash, open pits of feces and urine, rats and mice reveling in the death and decay; you were considered lucky to reach the ripe old age of 40.   Now are median age is nearly 70 and is expected to continue to rise.  But their lives were so much better, clear air, wholesome food, uncomplicated, safe.

Based on CDC statistics, the death rate per 100,000 populations has decreased almost in half from about 1,548 in 1900 to 799 in 2005.  The reasons for death have changed but the total number dying is a lot less with TB, diarrhea, and pneumonia topping the list of fatalities for our forefathers.  Cancer and heart disease as a ratio has tripled but the numbers of the dead have decreased significantly.  One-third of deaths in 1900 occurred to persons under the age of five. In 2000, only one percent of deaths were in that age group.

Were we better off in the past than now?  If you look closely at the statistics you will notice a very troubling trend.  In the past families lived together, worked, slaved and died early, but they were together.  They lived off the land, ate unprocessed food but succumbed to the wild and unpredictable spread of TB, influenza, diarrhea and the ever-present accident that in most cases initiated a slow painful death.  They had no choice, they had to try to survive, they did what they could without the advances we have today.  They drank dirty water from infected wells and streams, runoff filled with dead animals. They ate old, stale, singular foods with little taste or nutrition, worked too hard and lived lives of misery and pain but they had no choice and did not really understand any other way, but we have a choice, we’re just choosing not to live well.

We can eat healthier, we can choose to live better lives, less complicated lives, get more exercise (the gym) be closer to our families.  Our ancestors may have had to stay close to each other to survive but we have the choice to be close.  Our forefathers may have had to work hard to endure but we have the choice to keep strong, avoiding sedentary activities like excessive TV or game play or in my case blogging (remember I was at the gym).

Looking back into the past may give us a pretty picture of an idyllic life but the statistics show a very different picture.  The way history is portrayed is not always how it was.  It was a harsh and unforgiving time, a place of hardship and sorrow.  In almost every way our lives are better, even for the poorest and hardest hit, our lives are better, more healthy, and longer.   All we have to do is chose to take advantage and chose to live right, our ancestors would have wanted what we are throwing away. Let's not dishonored their sacrifices for us by letting all these opportunities for a "good" life fall idly by over insignificant disagreements about meaningless ideologies and political posturing.

We, all of us are so much better than how we have acted of late.  Maybe it's time to step back and realize who we really are.
Posted by politicaldad at 9:36 AM