Heads I win, Tales you loose. 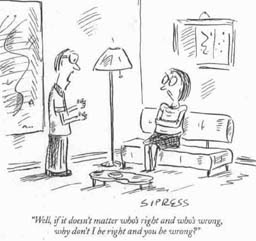 I’ve never really been afraid of polemic utterances and in fact I think I can honestly say that I’ve promoted my share of controversy through inflammatory statements, innuendo and out and out blatant ambiguity with the hope of spurring and inciting discussions for the sole purpose of getting people to talk.  What good is a blog if no one responds?  I  guess it’s like the experiment of determining if a tree that falls in the forest makes a sound, if no one is around to hear it, is it really a blog if no one reads what’s been written?

I like controversy, the storm and hullabaloo of provocation and the niggling of minds beliefs in order to garner debate.  Debate is good, “jaw, jaw, Jaw is better than war, war, war.  Winston Churchill.  As long as we can continue to debate the issues, as long as we can continue to flap our jaws the alternative of war is averted, at least for a time.  When talks break down, feelings get hurt or groups are offended the serious issues turn into unsolvable problems with neither side listening, there is not hearing when all you want to do is yell.

The issues of our day are serious and are on the verge of a breakdown from the salvation of discourse, common interchange of words for the purpose of finding shared beliefs and equal standings on the variety of issues that currently plague our nation and our world.  We are on the cusp of a meltdown, the boiling pot of community is overflowing into the fires of discord, burning and scorching every one as the once mild waters spill over, steaming its disgust over our inability to maintain even a low boil of civility.

Too many issues are already beyond tongued dissertation.  Abortion is fractured with both sides obdurate and obstinate, no space for yielding even the smallest of connection.  Conservatism versus Liberalism created a level of distrust that both sides see the devil not only in the details but in the actual representatives who speak for their beliefs.  It is an all-out war for supremacy and congressional control.  Gun rights, global warming, fossil fuels, the list goes on and in each case the galactic separation creates camps of followers that pay allegiance, scheme and strategies not for the good of the people or the nation but for their beloved cause.

Our nation has changed it used to be simple.  There was the Republic it was a representative government ruled by law (the Constitution).   Now, we have a democracy, which is a direct government ruled by the majority (mob rule).   A Republic recognizes the inalienable rights of individuals while democracies are only concerned with group wants or needs (the public good).  Even the fundamental aspects of our society have become fractured and blistering under the heat of controversy.  It seems as though no one really wants us to return to what worked and the plan is to move full steam ahead on tracks that have failed in the past and will most likely fail again.
The fissures and fractures within our standards are widening with an overall believe in moral relativism, whatever you think is right is right, just because you think it is.  But the Moral framework must be standardized or else there is no framework to speak of.  We must have standards and limits but so far all we have is discord and a cacophony of voices clambering to be heard just so the speakers can hear themselves speak.

How do we get back to the civility when one side or the other is obdurate and immovable? How can do immovable forces be aligned so that they move together?  I can only see one way.  Talking hasn’t worked, regardless of what Churchill hoped for, discussions don’t seem to turn the tide, nor do negotiations where both sides get less then they expect creating animosity and distrust.  This is the controversial part of this blog…are you sitting down or maybe you prefer to stand, whatever makes you the most comfortable:

As parents what do you do when your children don’t get along?  What do you do when two kids on the playground are fighting?  There has to be a superior force, a rational voice to intervene, a power over the rest that sits them down, tells them were their wrong and basically forces them to listen to reason.

One side needs to take charge, I mean really take charge and that my friends may mean real battles, a real war in order to establish the voice of law.

What side will you be on depends on what you believe, what your experience with history has been and what level of wisdom you currently possess.  Will you simply cut the child in half or find the true mother of our nation and give the child back to its rightful parent?

Posted by politicaldad at 8:39 PM