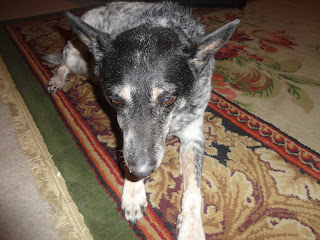 UPDATE:  At 12:20 Jake the Wonder Dog died.  He passed laying in the sun, his breathing just stopped.  He passed in a peaceful way.

This story was published on 1/14/13 and at that time Jake the Wonder Dog was still going strong, especially in relation to his current condition.  He is still alive, still laying about but now he's only laying about.  He can barely move, doesn't eat, but every time we peak in his room to check on him his weak tail starts to wag, not like it used too but he still acknowledges us even if his old body forces him to stay reclined his talil still works.

Jake is very near the end of his most incredible life, an even more incredible since the last time I blogged about this most wonderful pet and family member.
I wanted to give Jake one more shout out and one ore amazing look back at this "wonder Dog".

We have an old dog and when I say old I mean old, old.  Without the benefit of a dog year addition his age is still impressive.  We got him when he was only a couple years old.  He’s been a wonderful pet and still is, he’s not dead yet.  He’s slowing down, sleeps a lot, whines about all sorts of things, sheds hair everywhere but he still gets up and down the stairs, can usually make his way out to relieve himself (thank goodness for that small miracle, except for when he can’t, uuhg) but all in all he’s doing great for a dog who’s reached the ripe old age of 23.

This dog, his name is Jake, he was named long before my son Jacob was born or my son in law Jake was my son in law.  There is a bit of confusion when all three are present in the same room and I start  talking to one specific Jake and all three crane their necks toward my inquiry but generally each Jake knows when their being summoned (Clarification:  I don’t summon my son in law, that would be a mistake, he’s big, strong and …let’s just say I would not want to get on his bad side, not that that there is a bad side mind you, just a need to be careful is all).  Suffice it to say that when I call Jake the dog he comes.  He may be hard of hearing now but when you get his attention he lifts his head, his tale starts to wag and he laboriously maneuvers his old legs and slowly rises to the task.

We actually have a nick name for Jake (the dog); we call him the miracle dog.  He’s been on deaths door more than once and survived to bark again.  In each instance he’s been seriously wounded, lying still, panting with heavy breath waiting for death to take its toll and exact its eternal price, but each time his ailing and injured body recovers, vigorous and healthy, willing and able to take on all comers.

One of his misadventures involved small children.  There must have been five kids under the age of 5 playing around a grapefruit tree.  Each taking turns running in and out of the tree finding cover within the branches like a fort of leaves and branches a perfect hiding place of mystery and wonder.  Jake, as always keeping a close eye, but not too close, he tolerated small children but did not like the constant touch of their grimy hands.

Circling the tree, poking his pointed nose into the recesses of the darkness his ears perked, his tale stopped wagging and his head lowered.  The noise was imperceptible to the children but to Jake it was a warnings cry of danger.  The slithering sound of smooth scaly skin against silky fallen leaves and the unaccustomed sounds of a young rattler muffled by the cover of leaves and tree caused Jake to pounce.

With warning barks the children scattered in fear, not of the snake within but of his deep ferocious growls, the guttural sounds of a true animal ready to fight to the death.  With one incredibly fast leap Jake drove his head into the leaves and grabbed the snake.  To low on the body of the snake to control its head it reached back and bit Jake under his chin.  With a yelp of pain he released his grip but then bit again killing the snake but only after the poison had been released.

We all knew immediately what had happened.  Jake was the hero of the day.  He had saved the lives of at least one child perhaps more.  The children had been playing in the exact area where the snake had been and without Jakes intervention and sacrifice a child would have been bitten and the poison within Jake would have been surging through the blood of a small child.

Over the next couple of days Jake lay lifeless, his shallow breathing labored and inconsistent.  His neck swollen to three times the size.  As night came at the end of the second day we acknowledged our emotions to his imminent death, his breathing almost nonexistent, his tale courageously flickering but oh so slightly, just the tip switching up, falling in exasperation.

My son, who claimed ownership of the dog, (not the before mentioned Jacob) had kept an all-night vigil but had fallen asleep, as did we all, knowing the end would come and knowing there was nothing to be done but wait.  As we awoke Jake was gone.  He was no longer fighting the infection of poison, his body free from the convulsions free from the pain.  Jake was down stairs eating from his bowl, drinking from the toilet and wagging his tale in such a frantic manner as to tell us all of the miracle of his life.

The incident with the snake was only one life threatening event for Jake the dog.  He was hit by a speeding BMW, broken leg and rib he cried for a few days but continued his vigil over the property.  He fell down a cliff of thirty feet and we feared the worse but after a few minutes of lifeless panic he sprang to his feet and found his way to the top, almost smiling with his tongue hanging down in breathless wonder.

He’s attacked other dogs who ventured too close to his domain, many without any chance of victory, never failing, never falling in surrender. He was attacked by raccoon who took a large swath of meat out of his back, the vets told us to put him down, the risk of rabies was too great a risk, but like all the other events in his exciting life Jake the dog has overcome, overwhelmed adversity and triumphed over death to live another day, another year, enjoying each and every moment of his devoted life.
Jake may be around a while longer, his life is not over yet.  I only hope that I can have as much courage toward living and serving as he’s had for us.

I would love to hear about your incredible pet stories…Please post them for all to see. They can be an inspiration for all us.

Posted by politicaldad at 1:56 PM