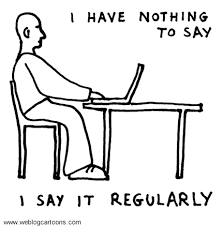 This is a blatant attempt to write about nothing.  There are so many topics, so many opinions and so few answers that I thought writing about nothing would be a nice change of pace.  Nothing denotes an absence of everything, the deficiency of all and therefor, conversely the total eradication of everything.  The real dilemma in discussing nothing denotes that there is the real possibility of something negating the entire conversation before it even starts.

Achieving a level of nothingness is a highly prized existentialist goal with the overall premise that in order to understand oneself one must admit to his nonexistence primarily in order to sustain the foundation of prima facia self-actualization.  That was totally made up, but it sounds cool and very knowledgeable and who knows maybe some philosopher will pick up on that wordy gobblygook and turn it into a bestselling self-help book, but then I would get nothing out of it I’m sure.

The point is very simple when discussing nothing; if we have something then the opposite of something is nothing. Well not quite, there really isn’t an accepted term for nothing, the sciences prefer to use the terms vacuum, absent or void staying away from the definitive “nothing”.  Nothing is a pronoun meaning the state of nothingness, nothing at all, no matter, no protons, no gravity, nothing measurable or immeasurable, the absence of everything we could think of and all things we cannot even dream of.

Atheist have a belief in nothing, they won’t claim it’s a belief for the very act of belief denotes the possibility of a god, accepting the reality of life as it is and then as it isn’t after death.  The state (can’t be a state, that denotes a position, a place) of being after death will be devoid of life and a total loss of all existence both physical and conceptual, there will be nothing a total end to what was to what is no longer.  Atheists have it easy it seems they don’t have to worry about guilt, the afterlife, choosing correctly, they have “nothing” to worry about.

On the other hand those who have a belief mostly believe in a continuation after life in some form or another bringing the hope of nothing a far cry from their reality.  Bridging the gap of both the believer and the atheist:

I tried to research for experiment to support the possibility of nothing but I found nothing.  Maybe the experiments also did indeed find nothing but were unable to report because there was nothing to report, how does one report about something if nothing is there except to say we found nothing, even if nothing was what they were looking for?

I have a headache and that’s something, it may be nothing to you but to me it’s everything…
Posted by politicaldad at 4:34 PM