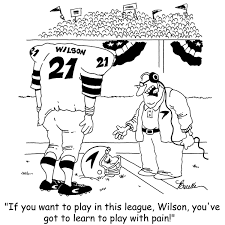 The super bowl is coming, an anticipated event for what Americans refer to as the greatest sporting event of all time, all time?  A little presumptuous but it’s all in fun, isn’t it?  We call it football a name stolen from the Original version (the English one...) that means the one from England.  Their game originated over 400 years ago, when villages, sometimes a mile apart, would kick a bladder (stomach bladder, the inside of a cow) around a stretch of countryside and the first one to get it to a set point, or a goal, in the opposing village would win. At these matches, they were incredibly violent; some people even used clubs to beat the opposition away.

Can you imagine the American version using clubs to break through the defensive line, wielding perfectly balanced bats, not to be confused with the American Baseball Bat or the English Cricket Bat, they would have to have their own designs I’m sure, maybe with spikes?

American Football was created and has very specific differences than its Soccer and rugby counterparts around the world, the most notable being the line of scrimmage, not to be confused with the rugby scrum and most notably the rule changes instituted by Walter Camp, considered the "Father of American Football" who also instituted the down-and-distance rules, in other words the grid iron and the need to advance the ball within set parameters.

The violence of the original and the current American version are about all they have in common.  The English version morphed into rugby and worldwide soccer while the cows, it might have been a sheep as well, bladder was eventually made into a real ball that was kicked around a defined field with thousands of screaming fans, standing, ranting, singing club songs and starting massive riots to justify a win or make excuses for loosing.

From its humble beginnings the farmers, shop keepers and anyone else brave enough to venture onto the open fields of England would do their best to avoid being clubbed to death or stabbed by a pitchfork or impaled by some other unknown sharp object.  Their goal was a simple, albeit a dangerous one, get the air filled bladder to the other town before the other town got that same bladder to your town.

Today we don’t use sticks or clubs, we do in baseball and cricket but generally their not used as weapons, we use padding, face shields, sticky gloves and helmets;  not only for protection but to cause as much carnage as possible with the opposing side.  It’s amazing what a helmet on the head of a 250 pound defensive end can do to the groin or lower back of the poor sap holding the ball.
We used to play a game in school, the name was very pejorative, “smear the ….” At the time I had no idea what a gay was let alone an LGBT (if you need to know look it up) but the game involved creaming the guy or occasionally the girl with the ball.  You could pass off the ball but that’s all you could do, there were no goals, no nets, no end, no glory, except for Danny the fat kid who could repel all comers and literally just stand there, laughing at the rest of our feeble attempts to knock him over.  The point is many of us got hurt playing this little game between finger painting and third grade math with Mrs. Maze.  I wish she would have picked up the ball, I think the whole class would have enjoyed tackling her to the ground.

It seems we are a violent race of people; we take great joy in watching boxers beat each other to a pulp, cage fighting and school brawls always bring a ready and curious crowd.  American football will most likely generate over 115,000,000 viewers, most loving the game, many having played in high school or college, many more thinking they played but almost all waiting with tongues hanging as they wait and drool over the helmet crashing, bone crushing crusade of one team trying to get the village of the other just to score a point or two.

Did I mention how much money the NFL makes?  Each season the NFL will generate up to 14 billion dollars. No wonder they don’t want their players, like Junior Seau who died recently from mental issues derived from taking too many hits to the head, to know about the devastating injuries, the loss of memory, the paralysis and the other life changing mishaps that occur on the field of battle.  Maybe we should simply pay our soldiers more and televise their battles; it is all about the violence isn’t it?
Posted by politicaldad at 8:42 AM