Choose another word, Marriage is taken... 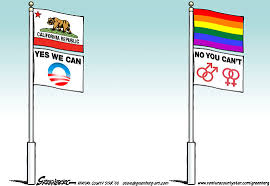 I’m a bit stymied by the confusion over Proposition 8, the proposition that states "only marriage between a man and a woman is valid or recognized in California.”  The reason I’m confused is in the word marriage as defined by many dictionaries is:  a (1) : the state of being united to a person of the opposite sex as husband or wife in a consensual and contractual relationship recognized by law.

This definition is not the only one but it is the most common one and the one with the most historical significance.  Marriage is an institution and has been recognized by virtually every culture and society for over 5,000 years.  I think that qualifies for substantial proof.

The idea that the word itself should be altered is not new, words have been altered and changed, misinterpreted and even co-opted to have a completely different meaning than the original.  For example the word Artificial, we all know it to mean fake or simulated.  The old Artificial used to mean “full of artistry or artistic skill, it’s changed completely.

Nice:  This comes from the Latin ‘not to know’. Originally a ‘nice person’ was someone who was ignorant or unaware. Not a nice thing to say about someone is it?

Awful: This meant ‘full of awe’ i.e. something wonderful, delightful, amazing. However, over time it has evolved to mean exactly the opposite.  I guess we could simply change the word to fullofaw and try to revert it back to its original.

Brave: This once was used to signify cowardice. Indeed, its old meaning lives on in the word ‘bravado’ or fake bravery.  It would be interesting to see how these words morphed into what they are today.

There are hundreds of such words and our language is ever changing.  The word Gay used to mean fun and light but trying using that in a sentence today and you might be considered homophobic.  By the way that was a word that didn’t even exist when I was born, or if it did no one knew it or dared use it.

Back to the word Marriage, its simple definition also includes union, merger or blending with the connotation that two become one, an amalgamated substance never before seen a completion of two parts creating a better whole.

From the desire to amalgamate, integrate and merge the historical understanding was the desire to create and expand from a singular soul to a unified body with the ability to procreate.  Marriage is the only word for centuries that capsulate this meaning and gives complete understanding to the Divine nature of such a union.

Regardless of what the Supreme Court decides the word marriage will still hold significant meaning to most of the populations of the world.  Even if they relegate the word to obscurity by dousing its meaning with dilutions of the law those that have entered into marriage, those men and women who respect the word will forever hold its standards high.

I hope those judges look at the precedent of history and realize that this word is more than a simple everyday word but an announcement from God that his law is greater than the will of a few malcontents and that His law should remain supreme as well as the meaning of the word.

Will these dissenters also be so adamant about the word marriage in other languages as well and will it be their goal to change those meanings as well.  If we lose the Supreme Court’s ruling regarding Prop 8 perhaps we could simply refer to ourselves as Casamentio, Portuguese for married, or you pick the language that best suits your needs.  It is only a word after all.
Posted by politicaldad at 3:30 PM