No Stupid Questions, Only Stupid People... 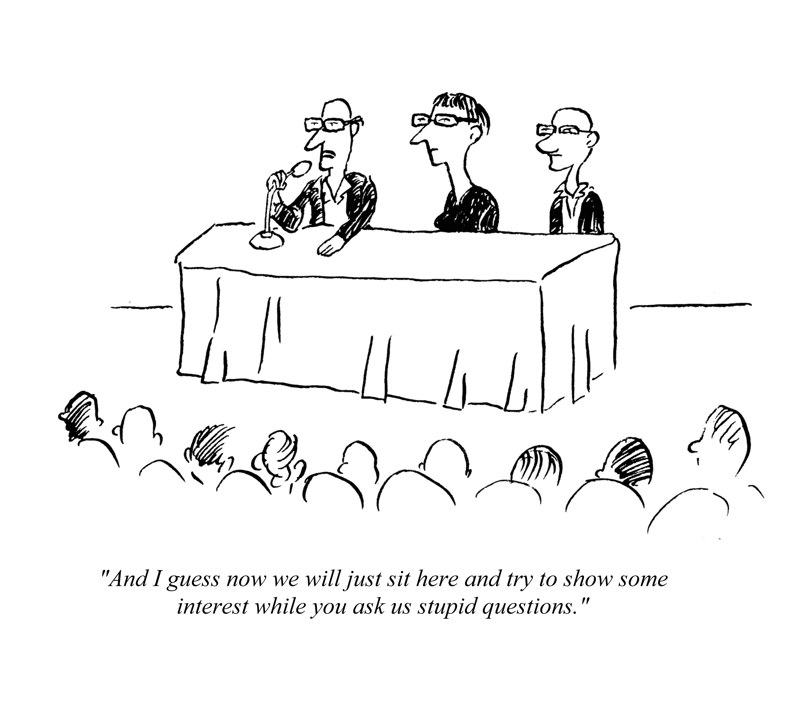 When I was a fifth grader I had a male teacher who had reached the level of a PhD, we were all to call him Doctor.  None of us knew what a PhD was and often whispered amongst ourselves and asked why he would want to teach if he was a Doctor?  It took a few more years to understand the difference and it took even longer to answer the question of why he decided to spend his time with us.  As I recall, he was fairly stern but liked to laugh, he was overweight but liked to play kickball with us.  He was an enigma and puzzle that took me years to understand.

He was a great teacher. He was great because he spent the time to answer our questions, delve into the whys of things and explain the mysteries that plagued our developing minds.  When a student asked a stupid question and the rest of the class started to giggle or laugh he would calmly stop the class and with his overly red face stare at us and whisper, “there are many of you who have the same question in your minds but failed to show the courage to ask, there is never a stupid question, a stupid question is the one never asked”.  He would then proceed to answer the question with the same level of deference and concern as any other.

I’ve been trying to remember his name, I know I knew it but now I know I don’t, it must be my age, but I do remember it was in 1965 and I was attending Badillo (pronounced, bad-ill-o) Elementary School ; we all just thought it was a funny name, we had no idea of its Spanish origin or true pronunciation, that would take a few years as well.

Even when we did something really stupid and I can think of more than a few in my case, he would gently remind us of our duties and responsibilities, telling us how great we were and what our potential was, instructing us how to be above the stupidity of our actions.  Don’t get me wrong he still sent us to the principal’s office but at least we knew he cared before we got paddled.  I think my butt still hurts in spots.

The reason I bring all this up is in relation to the recent exchange between Senators Cruz of Texas and Senator Feinstein of California when Cruz asked Feinstein a few poignant questions about the constitutionality of gun control.  The answer provided by Feinstein reminded me of my fifth grade class especially when she mentioned that she “was not a sixth grader…”

I know there is a huge difference between fifth and sixth grade but the point is not in the question but in the answer to the question and the relationship between her response and the thoughtful, caring response of my fifth grade teacher.  It seems to me that her response should have been more along the lines of patients and caring, trying to get the upstart to understand that there is no such thing as a stupid question but helping him to realize the truth of the answer.  That is if she were concerned about helping him understand and that’s where the problem lies.

We are no longer a nation of great thinkers; (I know there are many great teachers)  we are a nation of whiners and complainers.  We can’t simply answer a question with the desire to help others to learn because we no longer know the answers.  We bluff, we huff, we divert and deter, averting our lack of understanding and replacing it with bluster and bullying, hoping I guess that the question will be forgotten and only the questioner’s insubordination will remain.

We are no longer a people who value knowing.  We are a nation that values vociferously, vocal, vernacular, lacking in even simple substance, repealing the conversation for the contempt of position.  Feinstein could have easily answered the question with why she wants to repeal certain guns and not others with explaining that certain guns have a higher potential for extreme danger than do others and gone on to compare pornography with certain guns, calmly explaining that in societies we do regulate what we see, what we hear and what we use for the safety of us all….she could have done it that way, but chose instead to be offended.

One other small item learned in the Doctors (not Dr. Who, but in this case since I can’t remember his name Dr. Who is appropriate…) fifth grade class is, “if you can’t answer the question you don’t understand the topic”.

Maybe it’s time for our leaders to become more informed.  I really don’t mind the questions, I like hard questions they make me think and ponder and learn but when I hear the bombastic bluster of feigned offense I know right off the bat there either trying to evade the issue or they simply don’t know and in a politician that’s dangerous, but it’s been said many time, “we are in a dangerous times” perhaps that’s what they’ve been talking about all along.
Posted by politicaldad at 5:53 AM