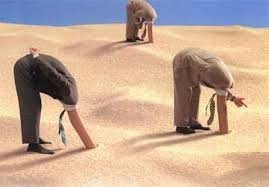 In the grand scheme of things what really matters and in that vein of thought what is the grand scheme, and does anybody really know?  There are so many thoughts and postulation about what is and what was that the very notion of trying to decide which of the many ideas and philosophies has merit drives us all toward the inevitable process of looking for that soft and comforting hole in the sand that stifles our perception from potential to impossible.

There is a level of comfort with not knowing and the predictable attitude of never having to know, simply stuck, head down, impervious to winds of change, resistant to the opinions of others and even strongly unaffected by the designs of progress.  Some might say true happiness comes when all else has been forgotten and so is the head in the sand a chosen philosophy, a conscious decision and way of life, not an escape from all that is but a move toward nonexistence, a  method of ignorance that tells a story for all to see.  Lest we forget, the head may be buried but the posterior is waving high in the air for all to see, a sentinel of solidarity, staunchly immovable with the hordes of others who fly that flag.

"All that is necessary for the triumph of evil is that good men do nothing." (Edmund Burke)  This assumes you believe in Evil and that the designs of others against what you truly believe really matter.  For those with head down and bottoms up the evil is a forgotten memory that only surfaces when eyes can see.  With complete darkness surrounding those masses of buried brains the true light of goodness never crosses their shrinking minds.  Like the grains of sand that seep into their mouths and noses the gritty reality of what might have been will never be.

Are we at war?  There are battles raging all around but for most it seems they are content to stand aside and let others decide their eventual fate.  With only flailing hands and exposed, fleshy cheeks they have no say in the decisions of each day and will probably never know when the end is near or when that end has come nor of the struggles by others to protect their ignorant domains.

They unknowingly survive by the valiant efforts of others who stand beside their bloated, headless bodies fending off the sharpened swords of determination, slicing all in their path.  The easy prey go first, the slow and the undecided, their only hope is the good deciding to act, knowing the outcome if nothing is done.

No one really wants to be at war, except those who wish to take, their ideals spurned on by greed and lust and power, willing to sacrifice the souls of all for the savor filled morsels of winning, controlling and enslaving.  Freedom is their enemy, self-determination a poison and liberty, that arrow that pierces their cold unforgiving hearts; these are our weapons against the coming tyranny but we are failing in our responsibilities to wield those armaments and employ those God given tactics that will defend our lands, our families and our souls.  Too many of us are content to let the battle wage, our own heads deep in the mire of indecision and vacillation, too concerned about how others will judge, preferring the depths of darkness and unawareness to the stark reality of what must be done.

I often ask myself if I’m doing enough, what else can I do.  I vote, I pay my taxes, grudgingly I admit, I obey the rules of the road, most of the time and I treat others with respect and kindness, in essence I try to follow that golden rule of “do unto others before they do unto you….” No I have that wrong, but I must admit that’s how I feel at times when I have to compete against the growing level of corruption, rampant fraud and dishonesty, politicians that blatantly lie and steal those taxes that I begrudgingly pay, leaders that manipulate the markets and shred our constitution for temporary gains of power and prestige.

A war is coming, not the skirmishes of late or the scuffles between parties but a real war like the civil war will pit father against son, it will be a war of liberty and freedom with the enemy within our ranks, fighting to destroy those ideals that make us free.  Will it be with guns and knives and bombs or will it be with words and laws and ideas?  Does it really matter?  The end result if we do nothing will be the same.

Email ThisBlogThis!Share to TwitterShare to FacebookShare to Pinterest
Labels: darkness, do nothing, Edmund Burke, good men, head in the sand, ostrich, war, winds of change