Why so much hate? 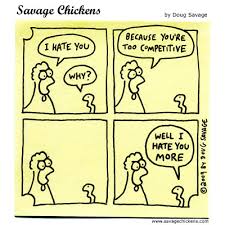 How do we reconcile the needs of the many with the needs of the few, especially when those few are bent on our destruction?  This is more than a philosophical discussion and more than a simple exercise in rhetoric it comes down to a fundamental process of who we are and what we believe.

There seems to be a growing number within the world that would see us and honestly would prefer us, the U.S. and other industrialized nations, and all its inhabitants DEAD.  They, thousands would gladly flip that preverbal switch extinguishing all that we are and all that we ever were just to rid themselves of a scourge that to them is like a plague upon the land.

The question that arises first is how a nation can feel so much animosity toward another and with such disdain as to want to annihilate the very existence of the other nation?  This may be a definition of pure unadulterated hate and hate unchecked is a form of insanity.  Hate is an intense hostility and aversion usually deriving from fear, anger, or sense of injury.

This definition plays throughout the millennium and in the instance of those who would do us harm has a real beginning and a reason perhaps for the long standing feud and blood lust.  Many of you will recall the story in the Bible of Esau and Jacob, the older Esau was the first born and under Patriarchal rules would be given the birthright and leadership over the family and its holding.

Let’s be real for just a minute, if you were starving after a long few days in the wilderness hunting and with no success you stumbled upon your brothers tent who just so happened to be cooking some very tasty “red Porridge”, would you sell your birthright just to keep from dying?   Well according to the story that’s what happened, he sold his right to leadership so he could eat.  Right or wrong, legal or not the trade had been made.

In order to complete the negotiations Rebekah had to be a bit deceitful and alter the conditions so that when Isaac actually performed the ritual to the first born he would believe it would be to his favored son Esau.
Covered in goats skins to mimic the hairy arms of Esau, Jacob entered the tent and gave his father the prepared food he had requested from Esau and proceeded to place his hands on the head of Jacob and bestowed upon him all the rights and privileges generally promised to the first born.

A deal is a deal right.  Even if we make a bad deal at times most of us realize that were stuck with it and move on, learning from our mistakes and hoping never to repeat that level of stupidity again.  But in the case of these two nations the offspring of Esau has never forgotten and have interpreted the sale of the birthright as a theft and the level of hate over the millennia has grown to insane proportions with the millions of followers hell bent on sending Israel and all who support them straight to oblivion.

It’s kinda like the Hatfield’s and McCoy’s, one side kills and the other side retaliates and the war begins, the hatred blossoms like a mushroom cloud infecting the entire region leaving no space for negotiations or  peace, just simple vengeance that turns the mind into an insanely lustful killing mechanism, no mercy, no love, no chance for peace.

Just like it is with the followers of the Koran and the fridge elements they spur on the hatred, using others to plant bombs to kill and mutilate.   The word Islam means not peace but submission and that is the goal of all who truly believe in the Koran.

The Koran states: Those that deny Our revelations We will burn in fire. No sooner will their skins be consumed than We shall give them other skins, so that they may truly taste the scourge. Surely Allah is mighty and wise. (4:56)
“Believers, take neither the Jews nor the Christians for your friends. (5:51)
“Allah is the enemy of the unbelievers. (2:98)
“Believers, make war on the infidels who dwell around you. (9:123)
“Fighting is obligatory for you, much as you may dislike it. (2:216)
“The unbelievers are your inveterate foe. (4:101)
“Idolatry is more grievous than bloodshed. (2:192)
“Fight against them until idolatry is no more and Allah’s religion reigns supreme. (2:193)

I think the message is clear, they want us dead, why do we continue to negotiate?  We understand their motivations, we understand their tactics, we also understand their resolve. Why are we acting like fools letting our citizens be killed and maimed when an easy solution would be to simply allows those who agree with civility to remain and force the others back to their own lands of hate and discord. Let’s profile….

Posted by politicaldad at 8:47 AM