Benghazi, the ill-fated, post home of a now dead Ambassador and four others, who in almost all accounts acted bravely to protect and defend this once almost unknown diplomatic outpost will forever be a household name and remembered as a tragedy that could have been averted. Now that is a sentence, can you do it in one breath?

Benghazi, its name roles off the tongue and creates visions of desert oases and date palms around crystal clear pools of fresh clear water.  Colorful tents and elaborate rugs circle the life giving pool populated temporarily by proud and stalwart nomads that roam the deserts of the lower Mediterranean.

I can see Omar Sharif, turban clad with flowing robes standing amidst his throng of concubines and wives, his sons and daughters and all his possessions, his deep thoughtful and penetrating eyes  staring beyond the horizon, deeply contemplating the universe and all that is, dreaming of the future, knowing the past but living for the beauty of now.

A strange tale for sure but one that many still believe as reality.  Even after the senseless murders of those who served in that once unknown outpost, any dream of a romanticized middle east should be forgotten and replaced with the horrid and inhumane conditions that caused this latest terrorist attack.  Benghazi is now in the history books and will forever be the place of a horrific attack on U.S. soil.

Benghazi is only one area of contention of the recent past. The entire area of the Middle East is aflame with anger, hatred and terrorism.  Evil minds who hijack the goodness and innovation that used to be Islam continue to plot and scheme using the innocent to create the terror that they thrive on.  They are no different than the other world despots that lead their people toward the inevitable cliff of destruction while they lay in wait, leering over the dead and success of their machinations.  They are the Hitler’s, the Pol Pots, the Idi Amin’s of the world, living on the misery of others and thriving off the death and devastation they facilitate.

What may be equal in severity to the actions of those who commit and plan these attacks are the governments who allow it, the people who condone it and the citizens who knowingly ignore it.  Our own government may be complicit and in a very real sense a partner in the tragedies that took those valiant lives.  For nothing more than political gain it seems that decisions were made and plans were ignored as the flames of insurrection rose steadily over an 11 hour period.

We may never know the real truth and many might not want the whole truth…”you can’t handle the Truth…” or so the statement went from some movie I did not see nor remember but  oh so poignant.  The republicans are fighting for the facts they say, the democrats are fighting to control those salient points and both are engaged in their own fire fight of rhetoric to upstage the other.

The facts are important and the truth is important but when the muddled discourse of so many clouds the issues to the point of obscurity the people as a whole will suffer, for as we try to believe, exhibit faith in those who lead the ability to see makes it possible, all we have left is what they tell us and we all know that what they say is subject to change and then change again and so on and son on….
Benghazi is only one event in a growing number of occurrences that shape our thinking toward the opinions rather than the facts that are so easily presented and changed, leaving most with the foul and distasteful savor of deceitfulness.  Our own government, our elected leaders, our secretary of state and possibly our president, along with both parties are subjugating our freedoms for their political gain.  Freedom requires that truth be mandated and exposed so salient minds can truly decide, but when those truths are covered up, twisted around and regurgitated our ability to decide is compromised and our choices for freedom are lost forever. 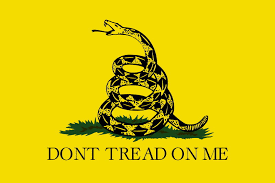 Demanding the truth is paramount to our republic and our demands for those truths should exceed the selfish and self-serving, political gains achieved.  Politicians be damned, it’s time to demand that statesmen run for office and time to demand that those in office resign or change their ways to reflect the needs of this call for freedom. “Don’t tread on me” The flag was designed by and is named after American general and statesman Christopher Gadsden and was used by the continental Marines.

Our new motto should be the old motto, “Don’t tread on me” for like a snake sleeping in the grass I will strike without warning and without respect, releasing my venom to any who disturb my rights and freedoms…

Posted by politicaldad at 8:07 AM