Wayward women, but not all bad 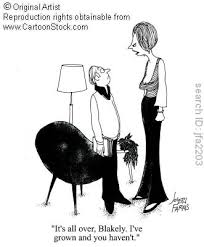 The rise of women seeking personal enlightenment and striving to reach that illusive brass ring is becoming a problem and who in their right mind would risk it all for a brass ring, gold perhaps but brass?

Over the past twenty years or so the number of women abandoning their families and more specifically their children has increased, leaving many to wonder why a mother would do such a horrific thing as drop her children off at school and never come back, just like Brenda Heist did Eleven years ago, as reported by CNN.

According to the U.S. Census Bureau, the number of single fathers has been rising steadily, from more than 600,000 in 1982 to more than 2 million in 2011, some of these are attributed to the death of a spouse but many of these increases are simply the result of women leaving the home and abandoning their children.

We most definitely have a double standard at work here.  Men who do the same and do so much more frequently are often given a pass and are not judged so harshly but perhaps some of that divergent judgment is due in part to the perception of a mothers first and foremost desire, an almost inbred response, an instinctual yearning to have children.  Men have only the desire to make the children and for most men that take’s a few minutes at most, despite the hyperbolistic claims of Hollywood and magazines that give super human endowments to male virility and stamina, the act itself is very short lived.

For women the act of creation is a lifelong commitment and current research suggests that many women, not most but many are having a more difficult time adjusting to societal demands that proclaim the ME is more important than the WE.

Narcissism is on the rise as well and may be the single most plausible factor to explain why an increased number of women are deserting and forsaking their initial instinctual drive.  Men have always been more narcissistic and conceited, present company exempted of course but we have come to expect men to be jerks when it comes to their wives and families, with countless stories of abandonment and betrayal that it’s really not even unexpected and in some circles its expected leaving the poor penniless woman to fend for herself and family, struggling day in and day out for those meager earnings while her wayfaring husband gallivants around spending his time sewing his seed and creating a reputation, good or bad the man is never judged as harshly as a women who would do exactly the same.

Perhaps if the men were more helpful at home, more understanding and more sympathetic to the plight of their wives those women would be able to tolerate the pressures of home life, find the courage to stay at home and be able to withstand the burdens expected.

Being one of the lucky men who has a wife who seems to be able to cope is not totally lost on my sensibilities.  With Mother’s day on the horizon perhaps it’s a good time to take stock in what we put our wives through each and every day.  Women, even though they are working more, earning more and taking on more responsibilities away from home have stepped up and continue to do the lion’s share of the work at home. (The lion's share is an idiomatic expression which developed from a number of fables ascribed to Aesop and is now used as their generic statement meaning that the lion will distribute his kill but will keep a majority for himself, they do eat a lot of food those lions)
I know men think their great, like the lion etc… and I know they believe that their all-important, like the king of the castle etc… but in reality who runs the home, who organizes the food, who provides for the children and the husband, it’s the woman.

My behaviors of late have been pretty much societally balanced (a nice way of saying I let my wife do most of the work) and I admit I need to do more to help, weeding the back yard once a year is not enough and if we want our wives to stick around maybe we should be rethinking our supremacy and our superiority and considering how unimportant we would be without the efforts, of our wives, that make us look so good.

An object in possession seldom retains the same charm that it had in pursuit.  ~Pliny the Younger, Letters…in other words men, keep pursuing your love or your love will decide to pursue another or she may simply leave.
Posted by politicaldad at 7:38 AM