If its Relative Does it Matter? 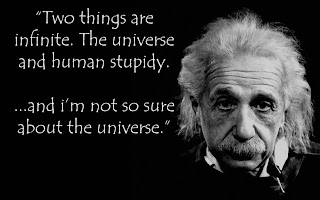 The admission of stupidity is never an easy process, every one of us wants to be considered intelligent and worthy of the accolades of mental superiority.  It is a humbling exercise in reality and in the relevance of all things that our thoughts and minds seemed stalled and numbed to not only the existential possibilities but in the proposed realities of a meaningful existence.   Not knowing, nor even comprehending the initial essence of relativism or absolutism, the feeling of falling into a deep endless chasm of uncertainty, believing that on either side may be an answer and the hope that if only a small branch or root protruding from the sheer rock would unceremoniously strike us on the face, then and perhaps only then would we start to comprehend.

I know I’m not alone in this but perhaps I’m the only one willing to openly admit to my retarded and stunted progress toward understanding.  It seems so prevalent in the media and with those who proclaim and espouse that an ultimate truth a universal constant is just around the corner but am I the only one who cares that no matter who says this about that the only constant in the human experiment is the theoretical.

Politics aside, every facet of our lives are filled with those who profess and declare absolute pronouncements of this or that, overly whitened teeth gleaming under the false presence of curled lips and winking eyes as the end of controversy is shouted and broadcast for all to see.  Two weeks, a month or even a few decades and the complete opposite views are avowed with equal fanfare and assurances of validity.

The greatness of Einstein was his ability to explain the concrete importance of relativism and the theoretical postulate of never really knowing and understanding that not knowing is perhaps the only constant for man and within the context of our limited and  restricted intellect.

Because of Einstein we did expand our understanding and advanced our knowledge but to what end?  It is that end that is the ultimate goal but it is also the understanding of those relativistic principles that keep us humble and able to expand and advance, even if we are mostly blind to what is it that constantly surrounds us.

What is interesting to me is the ancient plutonian theory of form being the prominent mechanism of reality for most of the human existence was not really supplanted by Einstein but was integrated and explained though relativism.    Abstract thought does not disprove quantifiable and objective measurements it only means that the relative view may not be broad enough to quantify.

Subjects of religion and spiritualism have a strong relationship with billions of humans but to date no one has been able to measure their relationship, their strength nor their effects, leaving stalwart  scientism as the only means of substantial proof of what many believe to be “reality” but in relation to relativism reality is only based on the perception of those viewing and event with limited senses and even more limited ability to comprehend what may or may not be viewed, leaving the option of Plato and related metaphysical options on the same plane of possibility as any other theoretical theory.

I do take exception to one point in this invective diatribe on the overall stupidity of man espousing and embracing the idea that the metaphysical and the theoretical efforts have continued to advance the physical and are therefore more important in the overall scheme of advancing the ideas toward that ultimate truth.  It will have to be theorized first, tested and proved second, as it should have always been perhaps.  It was this process that has always proved the most successful.  It is this process also when disregarded that the most discord between advance and societal retardation are at its most wide.  Remember the problems Galileo had when he tried to simply prove his theory?

When either science takes the lead and discounts religion or when religion proves too powerful and minimized or demonizes science the advances of human thought and technology both suffer.   It is truly the understanding that all things are relative that gives us a clear and concise view of the need for cooperative efforts from all modes of thought that will ensure our continued advances and the unrelenting evolution of partial truths and ideas toward that ultimate end of perfection.

Should we expect anything less?

Posted by politicaldad at 11:33 AM