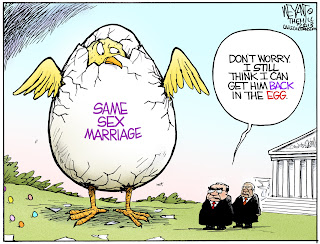 Let me get right to the point, Marriage is really only a word and the theft of that word from those who claim a singular connection to its meaning  is nothing more than an evolution of the lexicon and phraseology, a progression that has been taking place sense Adam named the first object he beheld.

Even though the word marriage has had a long standing run within that lexis, its endurance does not guarantee its continued longevity, everything changes, literally everything, nothing remains the same, at least nothing that we can perceive with our natural senses or with our finite minds.

The English language has changed considerably over the past 1000 or so years with common words being completely different than they used to be.  The word abduct used to be forwgan, you can pronounce it anyway you like.  The word battle evolving from beadu, at least it starts with a “B”.  If you’re interested look up the old English see the progression or lack of change over the years.

There are some words that have only changed slightly: Beacon, beacen, Beam remained Beam, and gay, the word has stayed the same but the meaning has been totally transformed into another meaning as many other words have done.

None of us would be able to understand our forefathers speaking “English” if we were somehow transported back in time.   Just as I suspect none of our posterity will understand our “modern” English 1000 years from now.  There are changes in my life time that exemplify the ever changing condition of communication, those changes are inevitable as life changes, expressions change, new technologies develop and the overall circumstance  of man is unalterably, inexorable.

The battle over one word, the fight over marriage has much more to do with the meaning of what that word means rather than the word itself.  Let the word go the way of the gay or should I say Homosexual, let it be co-opted and integrated into a new meaning of life, let the word change but let us not change the underlying motivations of what it used to mean.

Perhaps it’s time to let the word wither and die and replace it with another term that more succinctly underscores the true nature of a religious ceremony that defines a union between a man and a woman exclusively; that’s what the word marriage used to mean and to many it still does but like the way of the horse and buggy, it is no longer the primary expression of transportation nor is marriage the expression of commitment between a man and woman, the transplantation of buggy is now a car and the word marriage means anything that is joined under the law.

The word wīfung is the old English for wedding (giefta meaning marriage), it’s a bit of a change but if you look real hard and use your imagination perhaps you can see the evolution of the word over the ions of time.    I’m not sure if I’m ready to be referred to as being giefta’d or wifunged, I’m not even sure how to properly pronounce it.  I still like to refer to myself as being married but I also think it’s time to pick our battles and rethink our strategies.

Sun Tzu said “The supreme art of war is to subdue the enemy without fighting.  Appear weak when you are strong, and strong when you are weak…in other words (not really a pun) change the word, change the battle field, move our troops, relocate our objectives and rethink our ultimate goal.  A simple change of phrase could be adopted by those who have a preference for a religious ceremony designed exclusively for heterosexual couples, a marriage between a man and a woman but not called marriage.

Let’s redefine what we believe and give it a place in our modern lexicon.  For thousands of years the word marriage was assumed to mean between a man and a woman, nothing else was accepted so marriage became the established norm, but that is changing and therefore those who want a singular expression of commitment between a man and a woman need to redefine the communicative language that defines that expression.

Wifung, Giefta, maybe, I think we can do better than that, any ideas?

Posted by politicaldad at 11:57 AM