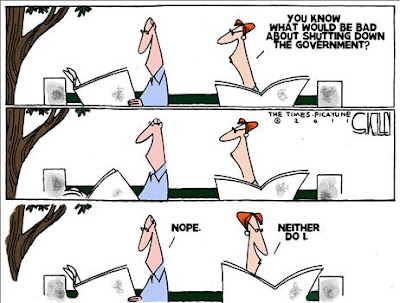 The problem with a government shutdown is not in it actually shutting down but in the accumulation of debt because it fails to actually shut down.  This may sound a bit like double speak but when you look back on all the other shut downs the employee’s, the government workers, contractors, special interests etc… always get paid what they would have been paid had they never been furloughed.


The insanity of our current governmental practices makes any attempts toward change by either party an almost impossible scenario of laviathonic eventuality.  The hope of change from shutting down the government only prolongs the inevitable juggernaut that rolls over and crushes everything in its path.   A few weeks or a few months make no difference to the trillions spent annually and the billions spent daily to the relative few who are sidelined by the temporary shutdown (it’s really only a slowdown).

There are some who will suffer but then what government really cares about those few in any regard; governments routinely push aside entire groups in order to sustain their own existence, knowing that the programs, the process or the agency is ultimately more important than a few misguided groups that supposedly believe in the inalienable rights guaranteed under the provisions of some constitution or document of ancient design.

Shutting down the government never really shuts down the powers in charge, it only relegates those in need to a deeper and a more desperate need, transforming that once simple need and dependency to a profound addiction based on a newly found hatred toward those affecting the attempted change.  That change is almost always initiated by the more conservative, trying to garner support for what they perceive as a runaway process of spending and entitleism.

Sorrowfully those attempts have never turned the public ideals toward their cause leaving them scrambling for support and running for cover.  Especially now in 2013 the call for fiscal constraint is tied to the affordable care act (Obama Care) and the desire to defund the before mentioned act in order to save the people from the evil of death panels, higher costs, less choice and longer lines for all that is health care will most likely fall upon not only deaf ears but ears filled with the fluff of discontent and the idealism of social reformations that entice those that profess to hear only what they want to hear, leaving the rational to query without recourse over the insanity of it all.

Idealistically the notion of a closed government rings with a sense of victory, even if the reality is nothing more than a wistful dream.  A closed government brings to mind the idea that the monster can be defeated and the hoards of regulations can be overcome, even if only for a few days the victory may be worth the ultimate failure of losing the war, a war that was in essence lost a long time ago.

There are no conservatives really, no banner flying, died in the wool constitutionalist that live and die for the sanctity of what our founding fathers established; there are only posers who ply the language to garner the votes to stay in office, never really standing tall and leading the charge toward their spurious but oft spoken beliefs.  The war is lost, so let’s bloody the opponent’s nose, let’s cut a few cuts and help them to remember and maybe, just maybe a leader will arise who has the courage and the fortitude to be believed and more importantly actually deliver us from the socialistic junta of despair.

Like a cyclone fed by the hyperbole of global warming our government is on a certain path to self destruction and un-sustainability.  It may take generations to complete the logical demise but this socialistic path has never worked, will never work and will eventually implode bringing with it the Constitution and the United States.

So let the government flounder, but do not give in, do not buckle under the pressure of those oily mouthed constituents, the free loaders, the special interests…come to think of it I’m a special interest group: married, religious white male in his late 50’s underemployed with kids still at home…so every other special interest but mine.

You let the government stop so let it stop!  Keep it stopped until you get what you want.  Keep it closed until you force the Senate to acquiesce to your demands.  If your goal is to stop Obama Care now’s your chance, don’t blow it, and don’t get scared, ride it out, the house is on strike, so act like the heroes you think you are and maybe, just maybe we can actually get some real change, for a change.

Wouldn’t that be nice?
Posted by politicaldad at 8:09 PM