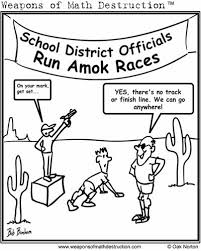 Perhaps the only outlet I have to expose the illicit and immorality of our school Districts is within this blog.  What that means is that most will not see what I've written and most will not become aware of the rampant selfish megalomania that is pervasive within most district administrative concerns.

There is a massive disconnect between the teachers and staff, the hard working individuals that sacrifice, toil and sweat over the lives of their charges and those that look snootily down with raised noses and a visible disdain over the masses huddling to stay warm from the wintry separation that is the “District”.

There is a distinction as well between well meaning principals and the Districts that oversee every paperclip and every decision in order to micro-manage the dust that accumulates under their un-moving but all too precious feet.  They claim concern, they feign with twisted faces and oily words only to look aside with skewed eyes and a contemptuous demeanor as there right hand falsifies and as their left -hand hides.  Like a street-side shell game the pea is never to be found, always hidden, the shells rapidly moving from one hand to the other promising this or promising that only to make excuses regarding those un-kept commitments, placing blame on the very souls they employ like the empty shells the simple workers are shuffled around but left empty after all the games.

It’s never their fault, they can never be wrong.  Their salaries are never cut, they are too important to be consigned to the mediocrity of having to deal with the realities of paying bills, raising kids, buying food or cloths or even books or supplies or a discipline policy that actually supports the teachers efforts to ensure a positive learning environment.  This is below their vaulted status and such menial tasks are for those who live far below their exalted station.  Heaven forbid their hands get dirty having to deal with the tedious tasks of teaching.

If the statement “for those who can’t, teach…” has any merit then “those who can’t teach go into administration...” qualifies as an eternal truth. I blatantly disregard the first part but completely agree with the second part.

The District makes rules, establishes edicts and pronounces standards, printed in flowery but unfathomable words, leaving the interpretation to those on the front lines, always ready to intervene to rewrite or elucidate those rules or standards ensuring their lily white persona remains untarnished regardless of the muck or mud they create.  Theirs is the perfect world and everyone else is tarnished and sodden.

Nothing more than a political animal, ravenous over the dead bodies that lies in their wake, their insatiable appetite ensuring a fresh path of bones will line their way, causing fear and loathing to all who fall under their influence.  District politicians are nothing more than seedy used car salesman who white wash the wrecks with promises of grandeur and filthy contracts that protect them when their own deeds crumble and crash minutes after the sale, their gleaming white teeth proudly pronouncing, “you bought it as is!” while under breath they laugh and snicker.

They're little fish in tiny ponds; thoughts of majesty fill their puny minds as they bully and threaten, pounding tables and heads of school boards who for the most part exist in the limelight of the superintendent’s gleam and influence, hapless lackeys that simply bend at the waste in absolution to  great one above.

I proposed a drastic change in the educational makeup of schools, calling for school site autonomy with the principal being the responsible leader with a parent and teacher board to balance and oversee.  There really is no need for a “District” no need for overly large duplication's.  See article entitled http://rtdezine.blogspot.com/2013/07/school-districts-demise.html

It is my simple and humble contention that principals are trained and ready to run each school independent of an overseeing District that does nothing to further the cause of education.  With each school autonomous the dollars designated for education would be better spent and more effectively spent by each community school with partnering schools buying in bulk as needed.

It’s time to end the monarchy of massive districts and bring education back to the children and teachers and out of the political hands that do nothing but perform circus tricks to entertain causing costs to rise and learning to fail.

I do have my own agenda based on recent developments within my own teaching career but that will have to wait until another time or if you’re so inclined ask away and I’ll try to explain my position and why my feeling about districts are so passionate.

In the mean time enjoy the read, for those who actually see this post and if you can share it, discuss it and perhaps between us all we can actually make a difference that helps our children maintain a positive mode of learning that actually works, like teaching does.
Posted by politicaldad at 7:04 AM