The penalties for free speech... 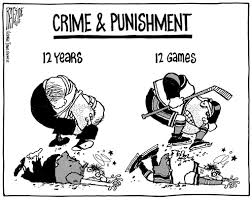 They say that violence begets violence and if just one person took a stand and stopped, the violence would stop.  It sounds grand and a little believable but it reminds me of an old Star Trek episode where Spock’s hero Surak, the father of Vulcon philosophy approached a similar situation and did stand up to the violence ….and was summarily executed for his effort.  You may remember “help me Spock…”


There are rules we live by but those rules are increasingly being unearthed as the rules of the decadent leadership meant only  for us and not them with illogical and irrational  and not them with illogical and irrational consequences attached.  Taxes and fees, administrative costs and non-refundable filing fees just so the few at the top can keep us shopping at the company store.   Years in jail for smoking pot, or certain “rule breakers” get off with just a slap.

The rules against violence are perhaps the most interesting.  They tell us repeatedly not to engage, not to employ the tactics that might keep us safe, trying to sell to us on the idea that “they” will protect us, but from what?  More like a racket of protection that relies on the fear of those selling the protection in order to keep us safe from them.

Violence, brutality, hostility and aggression are real factors that man has had to deal with since he first become conscious of his own mortality.  Those who make the laws have forgotten or more succinctly they want us to forget that violence can only be controlled by those with greater power, more violent perhaps, more brutality, maybe, but it’s the level of power that decides what level of violence will be allowed in any given situation.  Even Jesus Christ used a little violence when He extracted the money changers from the temple, using just the right amount of anger and violence to get his point across.

On the playground the bully decides who will be punished and who will lose their lunch money.  On the battle field it’s those with superior firepower and tactics that controls the war, but our leaders would have us believe that we should be submissive and trusting in their power to protect us, all the while they grind us underfoot, take away our liberties and destroy our very sovereignty, a freedom that was won with the cost of countless lives and violence by the way.

If two people are in a room arguing and one pulls a knife the argument usually ends, that is until the other pulls a gun.  I guess we could make an argument as long as neither had any arms of any kind they would simply keep arguing, that is until the larger or more skilled of the two resorted to fisticuffs and then were simply back to the survival of the fittest, not a great scenario for those of us that are older or weaker or less able to stand our ground, even if we are “in the right”.

That is precisely what is happening in our own country.  The arguments are being controlled by those with more power.  Political correctness has replaced the knife or gun but the power it has over an argument is just as profound.  The pressures of having to speak without hurting anyone has so overwhelmed our vernacular that even those who speak in private are shunned and shamed and punished.  Our first amendment right to free speech is far from free.  Take the example of Donald Sterling and his “racist” comments.  He is being punished for his free speech.

Whether you believe he’s a racist or not is not the issue, the issue is, does he have the right to say what he wants to say?  Do those in power have the right to censure and punish a man for what he believes or says?  The standard, it seems, is ever changing depending on who is in control.  The violence of his words may have been hurtful, may have been insensitive and may reveal his true character but is not that what free speech is all about?

Violence comes in a lot of forms, not all bloody and physical.  Two synonyms of violence are aggression and cruelty.  Both words seem to more clearly describe the repercussions and backlash given to Donald Sterling and both indicate a level of violence not measured as a suitable response for someone simply stating his beliefs.  Have you been on the internet lately and spoken a word against global warming?  Take a firm hold on your seat and be prepared to be slandered in the most vicious of ways.  If your beliefs do not coincide with others then you will be branded in a most cruel and violent manner just because you have a differing opinion, it’s as simple as that.

I don’t share those same vial tendencies and I don’t think I've ever spoken as Mr. Sterling has but I am not a public figure with every word, every movement recorded and scrutinized as he is.  Free speech is supposed to allow for anyone to say almost anything.  I understand as well that the basketball association has certain powers over their franchisees but like any organized power structure they seem to be overstepping their authority and enacting punishments that are egregious in their violent response.
This is not really about Sterling, it’s not about free speech, it’s about the power of those that govern our lives to enact rules that continue to destroy not only our freedoms but our will and free expression, our very lives.  The powers of government to change the rules without representation has become a real issue for all of us and one that we can no longer be silent about.  We don’t need to use foul language but we need to speak out and speak often and together we can take our country back, together we hold the majority of power, all we have to do is act upon it, with maybe just a little violence just for fun....
Posted by politicaldad at 5:39 PM