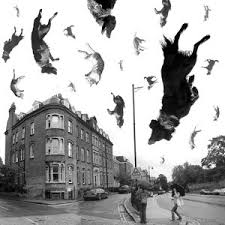 The other day I got a hunger pang about an hour before I usually feel the need for food.  I’m not one of those who have to eat at the prescribed time nor am I one of those who go through a series of personality changes, bordering on the insane, when food does not arrive or is not ready or is unavailable for whatever reason.  I actually pride myself on my ability to keep, as it were, an even keel.

That phrase “as it were” has always bothered me.  I asked a teacher once, thinking they knew it all but she was unable to explain and I’ve been in the dark, as it were, ever sense.  The meaning of the phrase is easy but its origins are not. The meaning of the phrase is: so to speak, in a manner of speaking, to some extent, etc…. but the origins are a bit more muddled, and by the way, I’ll get back to the story in a second, in a manner of speaking that is.

The form were is a past subjunctive, and it is used in a construction that is common in hypothetical situations:

He would kill me if he were able.

She behaves as [would be fitting / etc.] if she were upper class.

The phrase is theoretically short for as [it would be if] it were [so], though it is uncertain whether that is really where it came from.

The Oxford English Dictionary (2nd ed.) has its earliest quote from circa 1386:

As it were: as if it were so, if one might so put it, in some sort: a parenthetic phrase used to indicate that a word or statement is perhaps not formally exact though practically right.

Ok, I got that out of the way, as it were and can now get back to the story.  When I got hungry I had the opportunity to stop working and take a few extra minutes while the tile I was setting, set.  I drove a few blocks to a small but quaint little downtown area in Cleveland Heights, Ohio, there are a lot of these little hamlets but this one was the closest.

I chose a restaurant I’d visited previously thinking the food was good the last time, anyway I sat down and ordered a breakfast, it was 11:00 AM and I had yet to have my breakfast so it seemed like a good idea.  While I was waiting the gentleman seated kitty corner (ok that’s another phrase that kind of bugs me …but later for that one) from my table asked what the waitress’s name was and I thought I heard Cantaloupe.  What a strange name I thought and then got back to the local paper I had borrowed on the way in.

A few minutes later the waitress brought the man his cantaloupe. It took me a few seconds for it to register and then it hit me like a ton of bricks, as it were.  How could I have gotten that simple exchange so wrong?  I was close enough, my hearing is good enough and I was actually paying attention.  When the man stopped the waitress as she was passing he raised his cane to get her attention, it also got mine.

I’m still trying to figure out how “what is your first name” sounds like, and I’m just guessing here, “What kind of fruit do you have?”  He had to ask for fruit, her answer was clearly cantaloupe.  If something so ordinary can be so misunderstood can you imagine what we do to the complicated?

I've always had an interest in language, its origins, their meanings and their transformations and I thought I could not be duped so completely in regards to the basic understanding of the oral language, including idioms, synonyms and the subtleties of the spoken word, but I was and it’s actually disturbing.

Disturbing because I knew of the illicit practices of our politicians, the corporate world, local and state governments ….suffice to say, I think most of our organized functionaries try to conceal, obfuscate, cover up or just try to confuse so that they can refrain from following the path of honesty, it’s perhaps too expensive to be honest.

I knew they, (the above mentioned), did their best to keep the public in the dark, that’s what those who hold power have done since the first tribal leader embellished his skills for the purpose of staying in power, but to fall so easily over something so trivial as a cantaloupe, It was unexpected and eye opening at the same time.

It is easy for any of us to be manipulated into thinking something that is simply not true.  That is why we need to study the facts, as it were, in order to keep from making the fatal mistake of using that unintended but damaging information like I almost did when I was about to ask the waitress for some water.  I was about to call her by name, thinking that would ingratiate me to her and I would get better service.   “Excuse me, Cantaloupe; can I please have some water?”  Maybe she would have given me the cantaloupe, as it were, in my face…..
Posted by politicaldad at 6:20 PM