More than a wedding cake 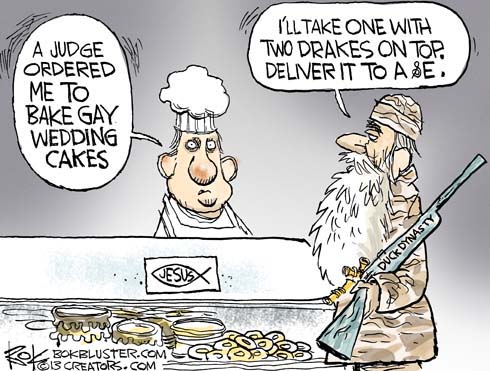 There used to be a fundamental right of a business owner to decide how to run his or her business.  Businesses can be run well or not so well, they can decide who their target market is and further decide how much to spend on marketing.  Business could decide where they were located and if they wanted to pay the higher price for a “good” location or save the money for a poor location.


Jack Phillips owns Masterpiece Cakeshop. In 2012, David Mullins and Charlie Craig went to the shop to order a cake for their upcoming wedding reception. They planned to marry in Massachusetts and have a reception in Colorado.  http://denver.cbslocal.com

Mr. Phillips refused them service and refused to make a cake for their upcoming nuptials.

The word nuptial means:
… of or pertaining to marriage or the marriage ceremony: the nuptial day; nuptial vows.  of, pertaining to, or characteristic of mating or the mating season of animals: nuptial behavior….however they may try to mate the outcome is assured, sterility is the outcome between two same sex couples, they therefore cannot Mate no real mating takes place).  Just thought I’d through that in for fun…

This is not a cruel statement or a statement meant to dissuade or harm, it is a simple and truthful statement of fact.  But this post is really not about the rights of same sex individuals to partner, make a life or wed but more about the right of others to disagree without punishment or the so common requisite penalty and stripping away those fundamental rights of business ownership.

Most businesses look forward to serving and selling and have very few restrictions self imposed or otherwise and relish the opportunity to sell their wares.  That fundamental freedom to act as your own boss is however being replaced by the increasing court mandates that preclude free choice based on religious convictions.  Jack Phillips choice to serve or not to serve was legally taken away and his only choice at that time was to either supply the wedding cake or stop making wedding cakes.

There are some legal impositions on some businesses.  The Gun shop cannot sell to criminals or to the mentally unstable.  Pharmacist cannot sell prescription medication without that signed prescription.  These rules generally provide for the safety of the public at large and it is generally that issue of safety that creates subdivisions in specific businesses.  Selling wedding cake does not, I think, impose safety risks on the public and therefore should not be a target of oversight by anyone except the owner of that bakery.

Is it not his shop?  Did he not put up the capital and carry the risk of his desire?  Is it not his choice what kind of cakes to make or what flavors to advertise or what styles to sell?  When two men walked into HIS bakery and asked for a wedding cake was it, or should it have been his right to refuse their request, regardless of the political leanings of the day?

Today, Colorado's Civil Rights Commission ruled that Phillips did violate civil rights law; the Commission says he has to bake for everyone now. http://www.thewire.com

So not only does he not get to choose who his customers are he is forced to bake for everyone, really, everyone?  Should he be forced to bake a commemorative cake for Hitler’s anniversary celebration by a local white supremacist group?  Should he be mandated to supply a cake for the local chapter of al Qaeda or a Quinceanera flat cake for a drug lord’s 15 year old daughter?  He might be advised to do so, on this score, since refusal may put his shop and life at risk…but if he is forced to bake a wedding cake for two gay men who want to celebrate their union what’s to prevent him from being forced to bake for other groups he does not agree with?

Another issue:  if he has to bake the cake does he have to make it taste good?  If it’s not good enough or let’s say he has a bad day and it’s just not that great of a cake, will he be held responsible for ruining their celebration?  How far will his responsibilities go?

My position is clear, let business decide who and what to sell and who and when to sell. The markets will take care of the minor details of those who are truly outrageous in their beliefs or actions.  If a person really wants to own a bar that only allows blacks, so be it.  If a woman only wants to work out at a women’s only health club, she should have the right and if a baker only wants to make wedding cakes for heterosexual marriages, then it should be his right to do so.

With all this being said I am a bit fearful of the current trend that might someday include who you allow in your own home.  Don’t be prejudiced, don’t be discerning, you may have to allow everyone into your home or risk being labeled a racist or bigot.  Most small business owners spend more time at work than at home anyway so who really needs a nice, safe place to go home too?

Posted by politicaldad at 4:38 PM