Hemet Teachers getting the Shaft.... 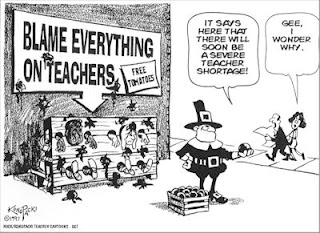 The City of Hemet has recently raised its incentive of $5,000 to $10,000 to entice veteran police to join its ranks.  Offering an incentive usually means that you’re trying to promote an item or you’re trying to sell an item that under normal circumstances people don’t want.


Working as a police officer in Hemet is a dangerous job and the city realizes that in order to attract experienced police they need to offer a bonus.  In order for qualified cops to consider the extra risk the city has increased that offering in order to mitigate those risks that will be taken each and every day while working in Hemet.

There is another group working in Hemet who has to deal with the same risky population.  Every single day they too must face these same dangers stemming from the same population that caused the City of Hemet to offer its police a $10,000 signing bonus with hopes of attracting the needed experienced police to help make the streets of Hemet safer.

This group is not being offered a bonus, they are not being offered a raise and in fact they have given up nearly 20% of their salaries and are still without a contract.  The interesting aspect of these two groups is that they deal mostly with the same population.  Crime in Hemet is considered high in relation to other cities and areas within Riverside County, only Perris a city to the west has a slightly higher crime rate and that can be explained partially due to its proximity to the freeway.  That level of crime in Hemet is the reason the City has to offer a $10,000 incentive to attract experienced police.

Since the average age in Hemet is less than 40 years of age and the unemployment rate is nearly 20% those committing the crimes are most likely school aged and are currently enrolled in Hemet Schools and are members of one of the many gangs thriving in the Hemet valley.  The Los Angeles Times and the New York Times recently ran articles describing Hemet as having “…one of the most dangerous jobs in America, being a policeman in Hemet…”

School Teachers deal with the same kids, the same gang members and are in a similar risky profession as their brothers and sisters of the police, but within Hemet the teachers are derided, ignored and severely underpaid, they are currently nearly the lowest paid teachers in the State of California.  The teachers of Hemet, despite the inner city conditions continue to do their jobs, showing up every day, prepared and ready to teach.  Hemet teachers also have to deal with one of the highest student to teacher ratios making their jobs even harder.

The community of Hemet is perhaps partially at fault.  They have consistently sided with the bloated administration to cut teachers pay and benefits.  But when you look at the facts and the relationship between the teachers and the police no one can deny the need to pay police for the risks they take.  In like manner no one should deny the teachers their well earned contract and the need to at least be paid near the average for all other California teacher, and especially since these teachers, the teachers of Hemet are forced to work under extreme conditions that are risky and dangerous.

If we care about our kids we would want to pay for the best teachers to teach our kids so that in the future we won’t have to pay a premium for the police to protect them.  It’s time to increase our teacher’s salaries and restore what was taken away during the budget cutbacks.   The billions given to California schools should not be used just to line the pockets of the superintendents and their pet projects, their friends and relative, they should be used primarily in the classrooms, for supplies and teachers salaries.

Hemet teachers need to be paid more.  They work in a war zone; they are forced to pay for pencils and paper for their students and are limited to how many copies they can make, they are expected to decorate their rooms having to pay for these supplies as well.   These are our children’s teachers, these are our children’s mentors, coaches, and inspirations, it’s time to reward them for the great job they do.  Return to them what was taken.  Restore what was promised and provide them with at least an average salary increase, they deserve it, just as the police deserve the bonus they will be paid to work in a high risk and volatile area.

Posted by politicaldad at 11:29 AM