There is a theory going around that postulates that everything we do, everything we think or even imagine is witnessed quantumingly (made up word) and that everything that happens has consequences based on some unknown balancing theory that protects the serenity of all that was, is and will ever be.

It’s not understood, at least by me, how the process of that all inclusive, all knowing, Seeing Eye actually sees but perhaps it’s more along the lines of a butterfly effect.  With a single flutter of a thin wing the potential of tremendous changes occur has been argued and theorized.  If one small whisper of movement can create a hurricane across the globe what kind of effects might my choices have on the universe?

From a quantum level all things are related.

"All things are connected. Whatever befalls the earth befalls the sons of the earth. Man does not weave the web of life; he is merely a strand of it. Whatever he does to the web, he does to himself.
--Chief Seattle 1854

I can say unequivocally that Chief Seattle was not a Particle or Quantum physicist and probably had no mathematical training whatsoever but his deep understanding of the connectedness of all things was profound or should I say is profound since time and space would have little meaning to a universe so intertwined.   That statement also gives some credence to the long held belief that the Native American has or had or maybe will have once again that ever so present spiritual relationship with the earth so often portrayed in movies and myth.

The idea that all I’ve ever done is somehow witnessed by everyone and everything is somewhat disconcerting.  I’m not saying that my neighbor see’s or knows what I did 20 years ago but at some level his quantumness and my quantumness are indispensably one in the same with quarks and leptons dancing freely though the universe.  The memory of all that I am is somehow attached as the billions upon billions of these unseen building blocks careen and zigzag through not only my body but through everyone and everything else simultaneously, creating an instant memory of all that is, all that was and somehow all that will be.

From this perspective our own personalities become cloudy as they are mixed and matched with the million, quintillion other material objects floating throughout space and time.  At that same moment our now, almost unrecognizable selves become more important than ever, especially with the realization that each of us is unique and exceptional with the singularity of oneness that comes from those building blocks as they continue to create and maintain the foundation of who and what we are.

It is that uniqueness and oneness together that confounds and confuses but also solidifies our understanding of how our universe is controlled and managed.  Whether by chance or by design our lives are inexorably related to all that is, helping us to realize that all we do has an effect on everything else.

Each of us is in essence a butterfly’s wing, never really knowing how our frantic flapping facilitates the events of other places, other people and in other times.  The complexity of trying to reconcile the two makes the theory of relativity seem like simple addition and subtraction.  On a galactic scale the connections between planets and solar systems boggles the minds to even the most ardent students of physics and theoreticians.  From my perspective it’s just a simple idea that tries to explain how those smallest of particles influence our lives, similar perhaps to the subtleties of a soft spoken sigh and the  profound influences it can have on both the seen and unseen worlds, the now, the past and the future. 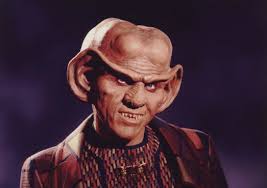 If we are so connected and if that web of life quivers for one then it quakes for all. Perhaps then we need to be more careful in how we speak, what we do and even how we think.  My neighbor may not care what I did 20 years ago but perhaps it will matter to someone 200 years ago or 2000 years in the future.

We can hope that we may never know what effects our actions have but I suspect it will become painfully obvious at some point in our eternal lives, a quark may be small but like in the Deep Space Nine character…they like to talk.
Posted by politicaldad at 7:53 PM