Angry Birds (crows) down for the count. 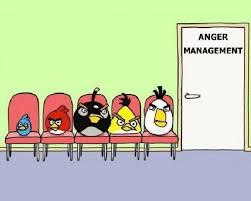 The weirdest things happened to me this morning.  As I was driving into the parking lot of a local high school I looked up in the sky through my front windshield and saw two huge, black crows dog fighting.   There massive wings folding and unfolding as they maneuvered through the air, narrowly missing the light poles and oncoming traffic, like my car, missing me within inches as they battled furiously over some furry object held fast within the talons of the primary bird.

I've seen birds war over food before.  I've seen seagulls swoop down and steal a sandwich out of the hands of my daughter and I've seen a pelican narrowly miss the tip of my son’s finger with its hooked beak but I have never seen such a display of desperation as I saw this morning.
The two blackened creatures tumbled and rose, flying haphazardly in every conceivable direction, defying gravity as they fought, escaped and tangled with such furry that I was certain that both would perish, oblivious to the dangers that raced past and the obstacles that lined the highway.

Temporarily out of sight, I turned right and then right again into the parking lot of the school.  My car slowed while I prepared to park and out of my periphery those same gigantic birds swooped low over my windscreen, their wings actually touching the glass.  I could hear the soft scrape as their feathery wings wiped my window, the feathers cleaning a streak of glass of the dust that covered my car.

Just as fast as they had descended the two antagonists rose sharply into the air and with a final thrust of effort the attacking bird seemed to ram the defender causing it to drop its booty.   I watched it fall, the legs and tail spiraling haphazardly from side to side and up and down, the fur blown by the wind as it crashed, almost purposely on the very spot that was previously cleaned by the warring birds, now awash with the gooey remains, my windshield now needing a new cleaning.

I don’t know if you would describe these events as weird but they were unusual, the word weird means strange, eerie and even creepy.  The used and battered being that bombarded my windshield, had it been alive, would assuredly think the incident peculiar and scary and if it wasn't dead before the fall it would have been after the back and forth in the air and most definitely after the impact.

Seeing a strange event in and of itself is not the point of this story and as you know by now it seldom is; my ulterior motive is to bring to light the often futility of what humans do on a daily basis and the pointlessness of what has become common place.  We fight, we disagree, we argue and chastise, judge and attempt to censure the ideas and desires of others just so we can have some semblance of prominence over another.

Our philosophies may be different and those differences seem to be growing not only in numbers but in severity and with that severity the punishments for non-compliance.  I may think I’m right and I will defend my position but when did it become fashionable to degrade those that were different, who thought differently or acted a bit out of the norm?  Oh wait; it’s always been that way.  Man has never been tolerate.  Man has never been able to abide the differences that make up our world.  Just look at history and you will see the evidence of racism, bigotry, chauvinism and a level of an incipient hatred that has no teacher but is born and seems to be a natural tendency rather than a learned trait, hence the warning “that  the natural man is an enemy to God….”

And so it is that like those vicious and greedy birds, the struggle of man continues, Neighbor wanting what they don’t have, Countries plundering in the name of sovereignty, political parties postulating possessive power in order to sustain or retake position and the individuals of all races, creeds and stations forgetting the simple solution of their divine origins following instead the adversary and universal antagonist without regard to the eternal splendor of that forgotten golden rule.

Perhaps it would do us good to stop, for just a few moments and reconsider our Natural selves and consider the effects of being more civil, more loving, more charitable and more divine.  Those two birds could have shared, stopped fighting and battling over that poor creature and had a meal together, but crows, I think, don’t have the capacity to understand, Humans, I think, do.
Posted by politicaldad at 11:58 AM