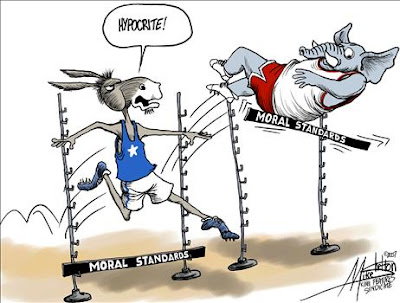 Many have asked what it means to be a liberal.  As a liberal you may even ask yourself what you believe, what you espouse and what you stand for.  The definition of liberalism is in short the belief in the value of social and political change in order to achieve progress.  That sounds great, and who could possibly argue with these lofty goals and desires?

The Conservative believe in the value of established and traditional practices in politics and society.  Why would anyone want to change what works and in the same vain this level of belief has a lofty and laudable goal of establishing a pattern of success that can be replicated.

When compared to the definition of liberalism, conservatism is not necessarily opposed to change and I don’t think that liberalism disagrees with standards of behavior and only wants change for change sake but the reality of political rhetoric you are almost forced to come away with the opinion that both are evil and both create the assumption that by believing in one you are incapable of accepting or even appreciating the other.

The reason this is a must read for Liberals and not for conservatives is due primarily in the definition that requires change in order to achieve social and political progress.  The first question has to be:  is change imperative in order to progress?  The answer is yes but one has to ask what kind of change and when?

Let’s look at the educational field and the past forty years.  Education has become a poster child of the liberal ideal of change with changes that have gone full circle in such a degree that the only viable visual would be a spinning yoyo moving forever up and down, revolving on its string, up and down but never changing its relative position to the hand that wields it.

I have been a special education teacher for many years and have seen the pendulum not only swing from side to side but up and down and all around, just to find the entire process starting over again with no progress in scores, student preparedness or value for dollars spent, which has to be considered as a gauge of effectiveness.  Our educational system has increased it’s spending fairly steadily starting with statistics of about 1% of GDP at the turn of the century and ending with current spending of nearly 7% of GDP.

Evan though the face of education has changed dramatically over the years and spending increased by trillions the overall outcome has not changed significantly and in some circles has declined not only in US standards but in comparison to world standards to the lowest level since the Second World War with student preparedness in relation to societal needs at an historical low.

From a conservative viewpoint the idea of changing for change sake works only rarely and is about as effective as throwing darts blindfolded at the stocks list to determine what to buy.   Could we have saved trillions over the years by simply staying an educational course and still had the same results as we have now?

The reason that education is used as a model to represent liberalism is the concept of change just to change and the opposing view of “if it’s not broke, don’t fix it” is so well exemplified within the educational world.

Let’s all just agree that we’re not perfect and that change is needed in many fundamental areas.  Changing however just to change creates just as many problems as those who fail to face their fears and decide to run away thinking that by running away their problems won’t follow.

Conservatism like liberalism is not perfect nor does it provide the end all philosophy that will ensure security and happiness for all, but when comparing the two and in relation to the old saying “teach a man to fish….” The overall outcome from a “proper” education speaks volumes in relation to the end game of what society is and where it’s going.

I am a conservative but the reason I stay with certain ideals is for the simple reason that they work.  The reason I stay with certain moralities is because I see the long term value of living my life according to principles that have proven effective and disdain those fly by night philosophies that make claims of freedom or peace without the requisite costs of sacrifice.  Nothing is free and nothing earned without work has any real value.

Liberals would take from me to give to another, what right do they have to take what I’ve earned (I haven’t earned that much but I like to think I deserve to keep what I’ve earned, especially when it’s given to those who do not know the value of work).

Liberalism would take from those who are “rich” thinking that because of their success they should be compelled to give to those who are not.  When put into the following context perhaps those liberal desires can be minimized:

Take an individual who takes his money and invests in a start up company.  He has no idea of its future wealth and that initial investment in most cases came from his previous hard work (most of the Wealthy in our country earned that wealth).  That investment skyrocketed and he became a billionaire.   What poor person is worse off because of his investment?  What homeless person is homeless because of his initial investment? And what neighborhood is considered poor because that one man decided to invest his money in a company rather than simply saving those dollars or giving those initial investment dollars away prior to investing.

The simple answer is none…

Then why does the liberal think it’s OK to make changes, for change sake without the requisite understanding of the end result?  Change is good, necessary and an important aspect of everyone’s lives.  Without change we stagnate and eventually die from atrophy, but the road to change should be subtle and planned not sporadic and haphazard just so those who initiate those changes can be seen as revolutionaries.

We had our Revolution and the changes made then worked, continue to work and will sustain us if we follow those same, proven precepts. Long live the constitution.

Posted by politicaldad at 3:54 AM