A Trump in Sheep's Clothing 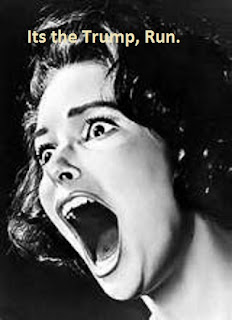 As you’ve noticed, I’ve put some time into writing about Donald Trump and his candidacy.  I have tried to consider the facts in evidence, his demeanor and the motivations for why he is running for president.  I have come up with a theory to explain his presence and his motivations.


For months now he has been wooing the conservative bloc and the republican constituency and to be honest, he’s done a very good job with both.  In order to understand his almost meteoric rise I think it prudent to look at the real man, Trump.  The man we see in front of us is not necessarily the man running and that troubled me and I think it should trouble all of us.


One of the attributes about Donald Trump that most seem to like is his openness and willingness to take on all comers.  He acts like a bull in a china shop with no regard to what he breaks or who he hurts, as long as he obtains the objective of his pursuit.  By all measures he is a success.  Even with multiple and public bankruptcies his current net worth is $4,000,000,000 that’s four billion dollars.  He is not the richest but he could easily pay for every facet of his  campaign and still be a billionaire.


My first concern is about the money.  As a businessman his first thought in the morning and last thought at night is about money;  he breathes, eats and ….digests...money and how to make more.  It probably goes much deeper than the simple pursuit of dollars and cents but with his psyche so entrenched with acquisitions and control the motivation for money is supplanted by what that money buys, POWER.


With power money really is irrelevant and the biggest prize of power just happens to be the in the Oval Office.  But, then I started thinking, that power, true power is often times disguised, cloaked and hidden, so why would he want to be so exposed when he could easily have it all without the risk?


He doesn’t want to be President, he wants to buy or manipulate the election.  Remember this when I’m right and just in case you don’t think this is my idea, I actually called the Michael Medved Radio Show and stated my theory to Michael and his guest Fred Barnes.   Neither disagreed and in fact both moved into that direction, speaking about his future Third Party chances.


He will not be the Republican nominee.  His motivation is to control the outcome by placing himself as a spoiler within the conservative ranks, peeling off 10-30% of the vote, leaving Hillary with a victory, a win she could not accomplish on her own.  Remember, Donald Trump is very good friends with Bill and Hillary Clinton.  He’s made many references to that friendship in the past. But even if Hillary doesn’t get the nod, Trump could easily parlay his following into one of the most influential voting blocks this country has ever had.  You think that Bernie Sanders would turn him away or even Bidden?  Not a chance.


The real benefit to Trump is not in the office but in the ability to sway that office.  He is a businessman and his business comes first.  When asked if he would support the party's nominee, he said no, leaving the door wide open for a third party run.  Keep in mind that, according to my theory, that it’s not about winning the office, it’s about controlling that office.  The president to him is only a puppet to be maneuvered.


I am swayed by his rhetoric and like his defiance and bully like tactics, we are in need of good leadership but when we superimpose his past upon his present, the businessman always shines through, the schemer, the planner, the eviscerating profit monger takes center stage, leaving the conservative well back in the shadows of who he really is.


Some say he’s the new Ronald Reagan and some say he’s a breath of fresh air but I say, “beware of wolves in sheep's clothing,” Trump is ravenous for control, hungry for the limelight and ready for a hostile takeover of the greatest prize in his Trumpdom.


Can you see it?  Can you see the White House occupied once again by Bill and Hillary, brought to you ever so kindly by a well meaning and benevolent (and yes I understand the difference between the B and the M) Trump?  I wouldn't be surprised to see the countries house sold and parted out with a new high rise in its place, the gaudy bronzed windows glistening and shiny, more like a high priced bordello, with payment plans available for any country that wishes to invest.  We the People bent over, a forced smile on our faces as we are stamped with the Trump logo on our behinds.


Last point.  Trump is a master manipulator and advertising genius.  No one can amass that kind of money and power without the ability to “pull the wool over our eyes.” For all that is said about an outsider running for President, I think perhaps I would like someone not quit so outside.


There is one caveat I should mention what if I’m wrong and Trump does get the nomination.  If that happens, forget all you’ve read above, Trumps my man….You heard it hear first...
Posted by politicaldad at 7:40 AM