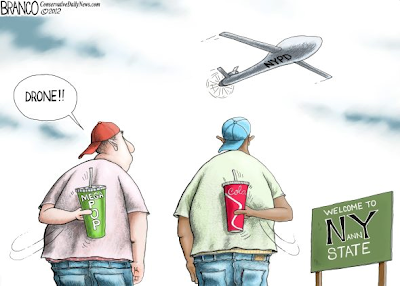 Politics is not always about the politician.  I think in many ways we wish it were.  Putting a face to our own distrust or fear makes dealing with those unknowns more palatable and real.  Faces are our way of distinguishing each other.  Take away the faces of politics and all you have left are the issues.  Maybe we should put bags over the faces of all the politicians?

When are faces are subjected to increased surveillance with cameras at every traffic light, walk way and public area, the idea of a private citizenry becomes almost laughable.  is perhaps the most un-private place on earth, with exception of those who willingly place themselves in a closed room, or house and feed their lives to any one who wishes to watch.

Our freedoms are connected to our ability to maintain a certain level of privacy.  Politicians and actors give that right away; reluctantly perhaps, but willingly understand the consequences of being a public figure.  With the common use of surveillance technology most Americans have had to live with the shadow of publicity lurking in the background.

I had a friend who received a ticket for going too fast on a turnpike in but he was never stopped by the Police, nor was he captured by a traffic cam or any other ground based methodology.  The ticket was issued by the State when his rental car exceeded the speed limit.  The rental car company was monitoring his whereabouts and his speed remotely, by satellite, and had informed (told on him, snitched) the highway patrol who sent him the citation.

Donald Trump, Hillary Clinton, Brad Pitt, Tom Cruise, and all the other want-to-be politicians and actors have the resources to shelter themselves from the ever present prying eyes of paparazzi, fans and the not so fans.  It is perhaps one of the curses of fame but when you have the money to spend for a week on a secluded , perhaps it’s worth the fame.

What about our privacy?  What about our piece of the pie, our homes, our back yards, our bedrooms?  The other day a man took out his shotgun and blasted his neighbors drone while it hovered over his back yard, blasting it to pieces.  The use of drones is becoming more commonplace and the fear of discovery, even when we’ve doing nothing wrong has increased exponentially.

The man who shot the drone was arrested for Criminal Mischief and had this to say, "He didn't just fly over. If he had been moving and just kept moving, that would have been one thing -- but when he come directly over our heads, and just hovered there, I felt like I had the right. You know, when you're in your own property, within a six-foot privacy fence, you have the expectation of privacy. We don't know if he was looking at the girls. We don't know if he was looking for something to steal. To me, it was the same as trespassing."

When we elect a leader, whoever that may be, we all, or should have an expectation that they are working for us and will do what they can to protect us and create a balanced system of laws that prevent others from spying, or hacking or any other privacy related mishap.  We all have to do our due diligence of course, but a drone over our backyard, cameras on every street corner, tickets given by satellite?  Where do we draw the line?

Will Trump level the playing field?  Will Hillary be the woman of the day?  She has taken steps, unbeknownst to her, when she took her National Secrets home with her and formed her own server.  It would be nice, in a manner of speaking if “whatever you do in Vegas, stays in Vegas,” implying that our lives are ours alone and should not be broadcast for all to see.  The politicians seem to be gambling with our freedoms, at least in Vegas we have a chance to win.

Evan if we had such assurances the current culture based on social media norms is to share everything, no matter how private.  We suffer from a disabling disease while trying to get our 5 seconds of fame, not fully understanding the ramifications of globally sharing our dirty laundry or even our clean laundry.

When the IRS can be hacked, and through the proverbial front door I might add, we have to start thinking seriously about the direction of our most basic freedoms.  Most of us don’t have the resources to fly off to some deserted island or hire security.  We can scramble our passwords, change our locks or even disconnect entirely, but the ever present wandering eyes of government will for ever be overhead.  That is unless we decide to stand up and take the shot (not literally).  But we must start thinking about these new global paradigms that pit us against those who supposedly try to protect that privacy, all the while installing more cameras, more oversight, more impediments to progress and ultimately creating a realistic 1984 scenario.

George Orwell may have gotten the date wrong but he was spot on in predicating Big Brother.  Ask yourself, who of all the candidates will be the best at protecting us from prying eyes?
Posted by politicaldad at 10:48 AM