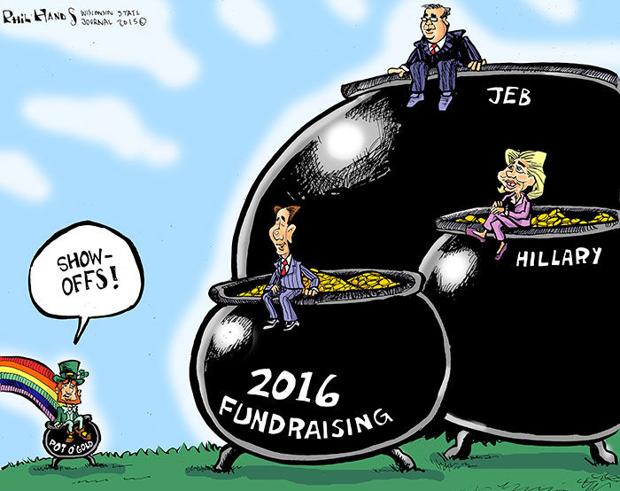 The past democratization of the world has had its bumps and lumps with many within those fledgling countries wondering if they had been better off under the forceful hands of the past autocratic government.  The problem with democracy is the dirty freedoms it allows and the difficult transitional adjustments that almost always occur.   Let’s face it freedom is a difficult concept to understand and an even more difficult process to undergo and maintain.

With an ever looming social system, higher taxes, centralized decision making and a serious reduction of states rights the US has taken the world lead against democracy, especially against the concepts of a democratic republic, stripping away the rights of representation though the process of cronyisms, increased corruption and legislative suicide for those who still think we live a utopian, constitutionally viable country.

With Presidential election still over a year away the prospects of hope loom high as each candidate represents him/herself as the most practical alternative to the disastrous 7 years of Obama.  Naturally they each move toward the Right with the hope that their past lives are forgotten in the present rhetoric and the public’s propensity toward forgetfulness;  hoping as well that they can find that balance of conservative and moderate, that so many pundits believe is essential in order to win a general election.

The Republicans have a difficult row to hoe.  Obama has been a very effective president, even in spite of the public’s belief that he has somehow muddled through, he has been able to pass virtually every one of his promises to “fundamentally change” the .  You may want to believe he was a disaster but from his perspective and from the perspective of his followers, he has been one of the most successful presidents of all time.  You may not like this revelation but you have to accept the fact that the once Great US is now far away from the founders, foundational vision of freedom and fairness and Obama did “fundamentally change” our country.

Will Trump be the vision of change or will it be Carson, Cruz, Walker or Fiorina?  It is too early to tell, 08’ is a perfect example of how anything can happen, how anything or anybody can spoil the chances of the so called “frontrunner.”  The only thing I can say at this early point in the election cycle is hold on to something sturdy; it’s going to be a bumpy ride.

The billions of dollars spent on this election should overshadow the past elections by leaps and bounds.  The super packs are poised to collect billions and billions with fewer restrictions on large donor contributions and no specific rules toward identification.   For the first time in modern political history “big” money has a new and legal, secret method of triggering paradigm shift like changes to a once only marginally stable electorate. Like I said, get ready for a bumpy ride.  The problem is those bumps will most likely be felt more acutely by the hoping public than in the halls of democracy.

There is nothing wrong with money and elections but the idea of having an electorate with unending political capital is the problem of a lack of restraint on future political decisions and the beholding attitudes that will abound.  Perhaps that’s one reason I tend to like Trump, at least for now.  He at least professes that his billions will keep him unspotted from the leviathans of high stakes money mongering.

Will his billions be enough when other huge donors are willing to match and overcome Trump’s own money?  He is a businessman after all, and as a businessman his attitude has always been profit.  He says he wants to “bring back” and he has said things that hit the right cords of public interest, but we will have to wait and see.

Can Cruz or Walker raise the needed money without becoming puppets of those donors?  Can Firorina maintain the support that seems to be surging in her camp?  Do we really know who is who and what is what?   Do we really know who our presidents and candidates owe their allegiance?  Do we know who our representatives follow?  Do they serve us?  I don’t think so.  I truly believe we are being sold out by our political leaders.  They do not serve us or the constitution.  We are only the means to an end.

The sad issue at hand is that the American Public still has the power to decide, barring of course the growing level of voter fraud and rigged electioneering, but the public still could decide if enough of them voted for the right person.  If we stand for Right, and if we stand for Truth and the Constitution (almost sounds like superman) we could, we really could get our country back.  But like always, there are divisions in the populous that care nothing for this country and only want their special interests satisfied and are willing to sell their souls for that specific want.

Perhaps it is too late.  Perhaps the country is too far gone but I know one thing.  My vote will not be wasted.  My vote will be a serious attempt, at least on my part to make things right, even if they continue to go terribly wrong.
Posted by politicaldad at 7:05 AM