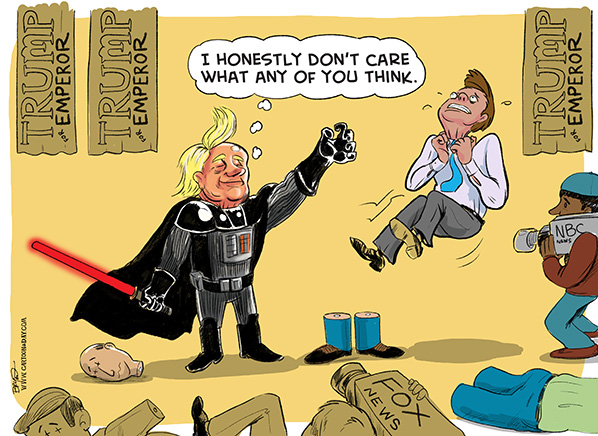 Politics has transcended the media roles of multiple genres in its fight against Trump.  With the new Star Wars movie “Rogue One” the inferences toward malicious motivations may be a bit far fetched.  With references to the insinuations of Storm Troopers rising from the World War I German assault troops called sturmtruppen and the more insidious conclusion of direct association between Trump and Hitler the ideas born of irrationality have indeed found a following.

“Erika Franklin Fowler, an assistant professor of government, has noted that 2012 may be remembered for its record-setting negativity. Fowler directs the Wesleyan Media Project, which monitors and analyzes televised campaign ads and found that three-quarters of ads aired during the last presidential race “appealed to anger.”” http://journalistsresource.org

Anger, it seems sells support and drives voters to some degree that any move away from that strategy is not a consideration for either party who really wants to win.  The same tactics in the 2012 election were used and doubled at the 2016 elections.  It may seem like a sad harbinger of days to come, especially with three quarters of the past ads in favor of using anger to promote and encourage supporters.  Anger is hard to beat and hard to replace.
Trump was no exception, nor was Hillary, both were heavy investors in the current process of using Hate and Anger to bolster their specific claims against their opponents.  Hate and Anger rely upon the emotional responses of latent and dormant fears that when spoken or heard find a fertile field to grow and expand.  For the most part everyone has some hidden fears buried within their psyche and for most those fears are kept in check until the voice within speaks, releasing any previous hold, allowing the fears and hatred to bubble to the top.

Once exposed and unconstrained the hate is allowed to flourish and expand changing the rational mind to irrational.  Changing the peace within to the turmoil of insecurity and anxiety, with the added problems of the illogical and the absurd, taking hold as if they were positive attributes, altering the minds ability to think and ponder judiciously.  Once unleashed the hate and anger is transformed from the depths of the mind to the forefront of our consciousness exposing every facet of our cognizance to the disastrous assumptions that carry little or no weight of reality.  Hate and anger only serve to create more hate and more anger.

For those who are boycotting the new Stars Wars movie, be my guest boycott to your hearts content.  It is your decision to make and to be honest the movie is probably not that good anyway.  From a cinematography standpoint have any of the Star Wars movies been that good?  I enjoyed them and loved the original effects portrayed but what will they really be missing if they decide not to attend?
There are excellent examples of how hate and anger portrayed effectively can transform a relative peaceful existence to a whirlwind of exploitation and corruption.  Northern Ireland helps us see those effects from both sides of the conflict with the Irish and the British forces fighting for years and to some extent still bubbling below the surface, waiting for the next explosion to bring the battle back to the forefront.

We all know what happened during WWII and the evil that was perpetrated upon the world when Germans and Japanese attempted to rule the world.  The problems with the Middle East show us that Hate and Anger have been alive and well within the area for centuries with no indication of any substantive change in the future.  It seems as though Hate is the motivator with any past indiscretions being forgotten long ago.
When asked about the feud between the Hatfield’s and McCoy’s no one really understood the events sufficiently to be knowledgeable enough to describe why the two families were feuding.  Historically the problem started with a Union supporter returning from the Civil War and his attack by Confederate sympathizers.  There was also a Hog in dispute but beyond those specific instance it was Hate that promoted the proliferation of the problem.

Look at our streets, if you can navigate around the potholes it’s the Hate, the ever present Hate and Anger that drives the crime, especially in relation to race relations.  They may have a good reason to hate, there may even been a justification based on economic conditions and past wrongs but when the rational mind is forsaken for some long term derision the ability to rationally consider alternatives is simply not there, leaving only the singular attitude of disgust to support the future actions and reactions.

Politically the consequences of using hate filled rhetoric is effective and may be the only way to win an election.  Changing the process may be too difficult and time consuming with the real risk of losing election after election while those changes are instituted with no guarantee of long term success.  Hate has been effective and for those with political designs will almost assuredly move toward what works rather than risking it all on the unproven process of positive electioneering.

There seems to be an overall move toward wanting less hate filled politics. Regardless of what is wanted the move toward change has been mostly unseen leaving the electorate being forced to endure and hope only.  There may be a move in the future but I doubt that any change will be made until the general attitude of the people force those changes.   Perhaps it will be the same people who voted for Trump.  They defied all the odds and prognosticators and won the unwinnable.

This process will take more than boycotting a movie.  This process will have to include a majority of our population and with them the cooperation of our politicians and leaders.  So basically there is very little chance that any changes will be forthcoming.  In the meantime I think I will fork out the 10-15 dollars and sit through another Star Wars Movie.  Meet you at the Theater.
Posted by politicaldad at 1:20 PM