A rule of law, not lawless rule. 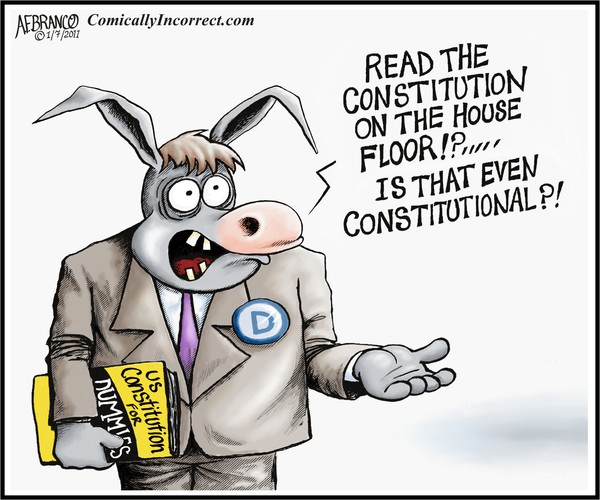 I hate to be the one to wail on a dead horse (keeping in mind that I love horses and would never really beat a dead horse, or a live one for that matter) but the subject of this idiom is particularly germane to the topic of the current childish but disruptive antics of the democrats.  Like a child who was told “No”, with the result of a childish tantrum of screaming, kicking and endless crying and tears.

It must be acknowledged that in the past, the democrat's stubborn antics did result in some changes but it must also be understood that the fictional parents of that child were weak and ill prepared for the tantrum that ensued.  Today there is a guy named Trump who really doesn't care what others think and who is more than willing to let the child scream, kick and cry to its heart's content.

This country has gone from one extreme to the other.  For eight years conservatives have had to deal with Obama who was bent on “fundamentally transforming the United States of America”.  The conservatives did not demonstrate, en mass did not speak of bombing or killing or in any other inappropriate manner to suggest anything close to what the democrats are doing now with President Donald Trump.  The democrats were upset after eight years of Bush, in some ways so was I, but the tale of how we deal with the opposition tells more about us, it does about them and in this case, their story is well known and disturbing.

The demonstrations and the sit-ins, the airport blockages and the freeway stoppages nothing will effect what Trump is planning and nothing it seems will sway his mind away from what he believes is right.  I get the distinct impression that Donald Trump doesn’t care if he is electable in four years or not, he knows he is president now.   His agenda is set, his plans are made and his process is decided.  So the bottom line is no matter what the democrats do Trump knows he has the power now to do what he has to do.

No one knows how long the republicans will continue to toe the line and allow him carte blanche, but for now (it has only been a week for heaven's sake) he has the reigns and he will continue to do what he wants to do.  There will most likely be a time in the near future that causes Trump some concern, a time when the republicans lose their resolve and buckle under the constant media pressure and call for change, but I doubt Trump will be swayed.  If anything it will be the general republican house and senate that will shy away and blink, more afraid of what those mealy-mouthed media monsters will say or do than remembering what is important for America.

Case in point:  When Trump nominated Judge Neil M. Gorsuch he chose a sitting federal appeals court justice to take the vacated seat of Antonin Scalia.  When Judge Gorsuch was originally confirmed it was done so unanimously.  This time around the flying excrement is already in the air.  The special interest groups have already poised themselves to defy the nomination on grounds Judge Gorsuch is unqualified and I’m sure there will be much more, and more extreme allegations that come to light from the depth of depravity that is the current democratic party machine.  Judge Gorsuch is eminently qualified, but qualifications are not the point.  It’s getting their way and crying and screaming, complaining and whining until they do.

This nomination was supposed to belong to Hillary, or at least to Obama but the republicans were able to stall the process, as is their right and privilege, the democrats would and have done the exact same thing, remember it’s politics and whatever a party can do to advance their party, they will do.  This process now falls squarely on the shoulders of Donald Trump and it is his privilege and right to do so.

The issue, however, is not when the nomination should have happened but to what lengths the other party will go to derail the process.  Hence the demonstrations, the near riots, and the speeches from famous but ill-informed starlets like Madonna and others.

Childish? Of course, effective? Wait and see.  We have had demonstrations about women's rights, abortion included, immigration and now we will have demonstrations about the new Justice nominee.  What’s interesting though is the rancor and incivility of these demonstrators, the rancor of their words (Madonna threatened to blow up the white house.  She stated it was a metaphorical statement but it was a threat at some level directed at Donald Trump) to their riotous actions, they are acting like spoiled children, finally being told to be quiet, sit still and behave, let the grown up talk a while.

I personally applaud Trump for his actions, his resolve, and his message and look forward to more of the same.  As for the rioters, the demonstrators, the instigators the hate speakers, let them vent, let them scream, let them show the nation who they really are.  We may be headed to a stark divide and the results of that divide may shear our nation in two but for me, I would rather be divided than to have to be ruled by them, and by their policies and rules.

What ever happened to civil discussions and friendly disagreements?  Both sides are at fault but the majority of unrest is squarely in the camp of the liberals.  It is obvious that the conservatives and the liberals will never really agree but what happened to agree to not agree and still being able to sit down and have a friendly conversation?  Have we really digressed to the point of civil unrest?  Have we forsaken the common ground that brings us together?  Is one opinion really that much different that there is no common ground and the only way to solve the issues is through physicality, are we not better than the animals who vie for territory, knowing no other way than to fight for what they think is theirs?

If we are to be divided, we are already divided philosophically, then let us prepare for that eventuality by upholding the law, the constitution, and our own morality.  We know what’s right, we live by what’s right and good.  The liberals only pretend and facilitate, never really settling on a morality, never accepting the truth.  The truth is a variable construct of a situational criteria that is ever changing and ever evolving.  Theirs is a life of relativism and constant change, a change that is suited to how they feel in relation to what they need and want, never considering the standards that brought this great land it’s freedoms and inalienable rights.

In order to survive as a nation, we need to work together, not just demand that others be what we want them to be.  The problem with this vaulted sense of existence is the demands that a specific set of beliefs has on those who do not share those beliefs.

We are god loving, family proud. We are a Nation that believes in our goodness and charity and we are willing to die for those blessing.  If that is not what you believe then this Constitution is not for you, this land is not for you because it is ruled by a consistent, pre-set rule of law.  Our founders understood the importance of continuity and may not have included all eventualities but the foundation for most of those disagreements are covered and the process for resolving those conflicts and are enumerated in the Bill of Rights, and the Constitution.  It’s time we all got back to following those inspired men and the government for the people, and by the people.

Make sure you follow me for all the exciting news and opinions ....
Posted by politicaldad at 10:04 AM