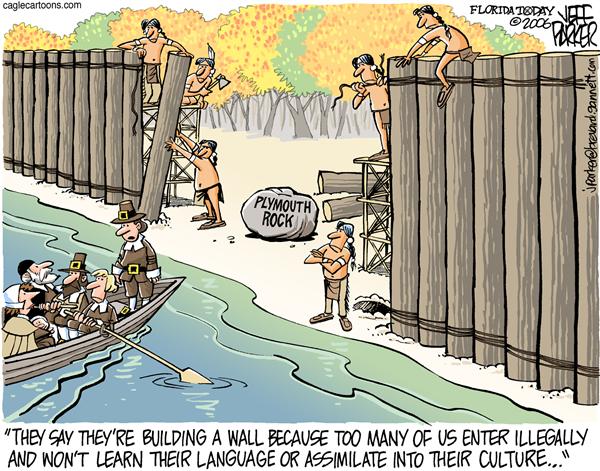 Regardless of your personal opinion regarding immigration the United States has been able to sustain a fairly consistent balance of those immigrating and those naturally born.  From a high in 1890 of 14.8% to the low in 1970 of 4.7 the range of immigrants allowed overall has never exceeded 15%.   Even today with all the demonstrations and all the arguments, the controversy over a “ban” or “pause” the total numbers of immigrants still fall within the National norm of past performance.

The politics surrounding these demonstrations and the rhetoric of abuse is simply untrue and uncalled for.  Past Presidents have done similar and more extensive and exclusive bans brought on by past political pressures, societal concerns and economic needs:


There are more examples of immigration bans instituted by virtually every president including Obama, both Bushes, and Clinton but for some reason when Trump does what others did he is a racist, a bigot and the worst human rights violator since Mao Zedong who killed more people than Hitler and Stalin combined.

I can understand the need for hyperbole when trying to make a salient point but when there is no basis in fact then that hyperbole is simply a biased exaggeration and a complete lie in all regards.  What troubles me the most is the lengths the left will go to demean and discredit without regard to the obvious facts in evidence.

The recent arguments regarding “fake news”  have to some been an eye-opening revelation about the nature of our “free and open press”, helping millions find their voice in the muddy river of lies and untruths.  These forgotten voters rose up and voted, giving Trump the nod of acceptance.  But now that same press that vilifies and marginalizes instead of simple reporting is fighting back, attempting to regain their position as the singular purveyors of this information age.

Similar in some regards to the quote by Admiral Isoroku Yamamoto regarding the 1941 attack on Pearl Harbor “I fear all we have done is to awaken a sleeping giant and fill him with a terrible resolve.” Those forgotten Americans have risen to the challenge of their own Pearl Harbor and cannot be silenced, diverted nor marginalized by those who refuse to listen to reason, accept the truth and forsake their attempts to reshape America into something un-American.

Since when is it alright to resort to hateful demonstrations to further a cause of peace?  The answer is never if peace is the goal.  Those that hate will utilize hate and anger in their actions, their speech, and their writings, they’re easy to spot.  Gandhi proved that peaceful demonstrations could cripple an empire.  Demonstrate peacefully, keep your rhetoric civil, stop rioting and maybe someone will start to listen.
Posted by politicaldad at 12:18 PM