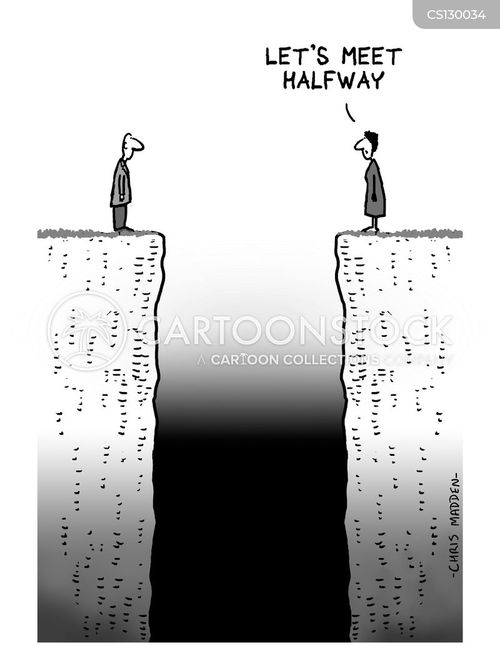 To compromise is to make concessions.  Making concessions is giving up, relinquishing power or control and in many cases, beliefs are negotiated.  Negotiated beliefs are rarely beliefs and are only temporary foundational stances to enhance the process of compromise.

We have all been taught that compromise is essential to positive social interaction and continuity.  We have all learned that to promote the common good compromises must be made.  Driving on the streets of any city is a perfect example of conciliation; no one can drive unfettered from the rules that apply to all.  The chaotic effects of those who do not subscribe to the rules create a dangerous environment for all who want to drive.

Many aspects of society are therefore regulated, making society a quintessential forum of concession.   Society would be impossible without the self-relinquishment of personal choice and desire.

Beliefs, as opposed to politics, opinions and transitory views fall into a category that should be seen from a different perspective.  Beliefs proclaim the truth.  Whether true or not, provable or not the belief is the position of truth and should not be compromised.  Beliefs can change and often do, but when a belief is established, the proclamation to others is from a stand of permanence and stability.
Do we compartmentalize our beliefs as strong or weak or is a belief substantial to such a degree that any variance from that supposed truth must be and will always be foundational to what we are, who we are, and will it provide the structural reinforcement to overcome the adversarial opinions that attempt to sway us from those beliefs?

I have a belief in God.  Should that belief be foundational, even if the country I live in chooses not to sustain that position?  The real question is, when do we decide not to compromise?  My simple answer is when we decide what to believe.

The 2nd amendment to the constitution reads, "A well regulated Militia, being necessary to the security of a free State, the right of the people to keep and bear Arms, shall not be infringed."
There is a serious debate over this issue but as it reads, not interpreted, we have the right to keep and bear Arms a right that shall not be infringed.  This is a belief in our constitution and the wisdom of the Founders who authored those words.  If you fail to believe those hallowed words, then the issue of citizenry comes into question.

Of course, we all have the right to question but do we have the right to change what made us citizens, especially when those questions are intended to alter the substance of who we are, and what we are.
A similar question arises with the Radical Muslim or Radical White Supremacist who want to alter the premise of our constitution.  We are Americans because of our Constitution.  Our Constitution should not be up to debate.

The First Amendment reads, “Congress shall make no law respecting an establishment of religion or prohibiting the free exercise thereof, or abridging the freedom of speech or of the press, or the right of the people peaceably to assemble and to petition the government for a redress of grievances.”
This Amendment states clearly that Congress shall not prohibit or abridge the freedom of speech but when one group is denied the right to speak because their opinions differ from those in control then their freedom to speak has been abridged, perhaps not by Congress but when one citizen has been so regulated are not we all?

The uncompromising aspect of the Constitution has had its detractors since the very onset of our Republic but the staunch adherence to those principles has sustained our union for over 200 years.  Compromises have created divisions that have grown into vast separations and ideological chasm left unchecked will destroy our Union and the Constitution and with it any semblance of what makes America great.

The immigration issue is a perfect example of compromise gone awry.  With many politicians espousing the rights of the illegal immigrant over the rights of citizens, the issue of citizenship has become a clouded issue.   The right to vote has been marginalized by many wanting illegal immigrants to vote, further compromising the role of those with legal and rightful status.

This is about beliefs, this is about what is true and right.  For too long we have sat on the sidelines as others have forced us to compromise our beliefs.  With each compromise, we have less to give and less to lose as we slowly and inexorably give them the power over what we believe.

And Joshua said unto all the people [of Israel], … choose you this day whom ye will serve; … but as for me and my house, we will serve the Lord” (Josh. 24:2, 15) I would add, we will serve the constitution and abide by its principles.
Posted by politicaldad at 2:10 PM