For the last thousand years, parents have been screaming at their kids to “clean their rooms”.  This fight over something so seemingly, inconsequentially benign is either important or it’s not.  It is either worth all the yelling and fighting or it’s been a monumental waste of time for millions of parents over ions of time.  To some, the idea of forcing your kids to clean their room is battle left for another day and to others, it is a war that must be won at all costs.

Having a clean room has its advantages but those advantages are often not understood nor are they high on the scale of importance when other more important events remain looming in the distance.  What does it matter if every towel in the house is sitting on the floor of your son’s room, festering and molding, when the fate of the world is in the hands of a crazed dictator.

Even the term “cleanliness is next to Godliness” may not have application if the desire for cleanliness is overshadowed by more pressing events, like depression or illness or even the belief in a God that bridges the gap of worldly chaos and motivates an individual toward cleanliness. Cleaning one’s room cannot be that important.

I very rarely cleaned my room but then I had a maid, Candy, short for Candelaria, she cleaned my room at least three times a week or when my mother couldn’t get into my room to tell me to clean my room.  I never did understand what the big deal was.  After all, it was my room I thought, and I could live in it the way I wanted.

Looking back however and looking through the eyes of experience and understanding, I am beginning to understand the reasons that my mother wanted me to attempt to clean my room.  She may not have known or understood but she was right, as are all mothers.  They may be been driven by differing motivation but their desires for us to clean our rooms create a foundational process of maturity and in a way starts the learning processes of life in general.

So often, and especially these days our youth are hell-bent on forging their own path toward a different future than the ones we may see.  That is all well and good, but they often try to change the future without understanding the past nor relying upon the skills of those who have learned those essential lessons that established the levels of society that allows them to choose, again, nothing new here, it’s always been that way to some extent.

But now, they are willing to force their will, manipulate the present, organize a movement and create a new and “better” society without even knowing where their socks are or how to put a shirt or dress back into the closet.  Our children cannot clean their rooms, but we think they're ready to create legislation about gun control?  They fail to replace the wet towels on their floor, but we think they are ready for rational thought?  Same as always?

Cleaning a room may not seem like much, in fact, it is often construed as an activity that is beneath our children, they have so many more important things to do.  There is perhaps nothing more important to do when your young but to learn those fundamental lessons learned from organizing your lives by folding your clothes, picking up your socks, hanging up the wet towels so that you have a dry towel tomorrow.  It is through this simple process that the more complex societal procedures can be understood.

If we want our children to learn to be functional members of a functional society than perhaps as adults we should start demanding that our children, even our older children still at home learn how to pick up after themselves, clean their rooms and maintain their lives.

I was never that great at doing my chores, but when I was asked I did make the attempt to cut the lawn, clean the pond (yes, I had a cement pond with fish that I had to clean) weed the rose garden, rake the leaves that fell constantly on the path behind the house and whatever else I was asked to do.  I crumbled, I complained and most the time I did a poor job and rarely completed the assigned tasks to my father’s standers, but I did what I was asked.

Whether it’s cleaning their rooms, doing the dishes or helping with the general upkeep of the house, our children need to be engaged and held responsible.  It is this process that helps a child learn the differences between selfishness and altruism, the difference between being egotistical and humble.
Most children will not develop these essential traits of maturity without being held responsible for their actions.  We rarely hold our children to the standards of the past and just assume they will learn the skills of sobriety as they age.  It is not happening…Something has to change…

Posted by politicaldad at 7:47 AM No comments: 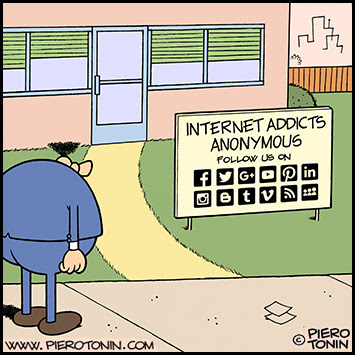 The efforts we take to protect our children may seem profound and unchallenged but when taken in the context of the risks they face our efforts are less than stellar.  Stopping a child from falling off a cliff or engaging in risky behavior is often easily defined and the proper intervention is clear, but when the risks are unseen, unheard and unknown the motivation to protect is often overlooked or ignored.

What makes life so different now, as opposed to anytime in the past is the constant and oppressive constraints influencing all we think, all we do and all we think of doing.  Never have so many been so infected by something so innocuously poisonous.  We are a society drowning but not knowing it, dying but not admitting to the internal disease that is inexorably destroying all that we once were.
If this sounds a bit hyperbolic then consider the following statistics:

73% of young people between the ages of 18-34 would rather text than talk in person.  This may seem innocuous but in relation to how our children are acting and reacting the simple statistic and the pervasiveness of the problem becomes clear.  We are raising socially inept children, forcing them to live the life of autistic, self-absorbed and internally driven miscreants that only thrive when they get their way but not ever understanding that they are the problem.

62% would rather leave home without their wallet than their phone.  Telling us that their identity is inexorably related to their online persona rather than the physical being of who they really are.
For users between the years 16-25 350 million social media users are addicted.  There is a slight difference between males and females but only by 8% favoring Males who check their social media at least 10 times per day.

There are excuses for these tragic numbers, but the results of those oversights are having disastrous consequences, not only for ourselves but by increasing severity for our young.  My generation was enthralled with the new technologies, but we were oblivious to the looming consequences that now include a precipitous drop in civility and mainstream socialization.

31% of adolescents freely admit to reading and writing on a social media site while sitting on the toilet.

45% of users check their timeline while eating.

37% of students admitted that their social media updates were more interesting than a classroom lecture.  Hmm, that one might be right…

The University of Pittsburgh School of Medicine reported that “The more time one spends on social media the more likely they are to become depressed or suicidal.”  In other words, the more time online = less satisfaction with Real Life.

We are literally raising children who fail to grasp the realities of existence and then turn to social media for answers that further distort their already skewed level of rational thought.

25% of those photos were of naked children, posted by those same children.

The good part is that at least they're honest with their identity, the negative part is they have no idea of the future ramifications of their actions nor the risk to that identity as others with fewer morals prey upon that openness.

I've not even mentioned the hundreds or thousands of Apps that can be accessed that allow our children to hide what they do, hide what they see, share with others what they don't want their parents to see, the list goes on and on.  We, this country, our children are in crisis.  Depression is on the rise, suicides are increasing and bullying is rampant across the web.

The future we have allowed to happen is a direct result of our ignorance and our willingness to connect with our children in meaningful ways.  There is no excuse for ignorance but our unwillingness to intervene now, when we do know, when we do understand, goes far beyond irresponsibility and squarely into the camp of an alienation disorder with the subtext of creating a delusional, illusion of sanity and responsible behavior, in other words “what I don’t know can’t be real, so why bother….

Perhaps we should sit down and rethink our own priorities.  Sit our children down and let them know we’ve had enough, we’re the parents and we have decided to grow up, take the heat, make the hard choices and help them heal from the devastation of not knowing, we do know now….  We can no longer let 15-year olds tell us what is best, what is right or wrong and we can no longer put off being parents.  If we fail to act now we will forever reap the bloody consequences of our inaction.

Posted by politicaldad at 4:39 PM No comments: