Democracy for the masses 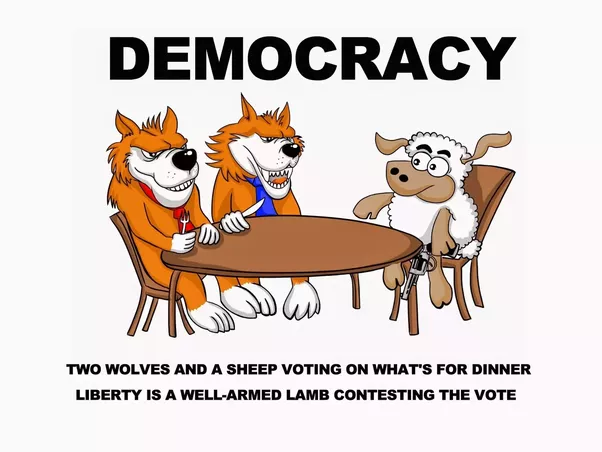 The trade deal with Mexico is just another promise made and kept by President Donald Trump.  If that sounds like an apologetic stance, it is, to some extent.  The need to apologize is not the issue, nor do I believe that an apology is needed in relation to Trump acting like Trump. Being an apologist denotes the need to speak in defense of what many consider to be unpopular, and for the most part, the Left has made anything and everything about Donald Trump, unpopular, but unpopular to who?

Our Founding Fathers understood the need to swim against the flow, to make decisions that are unpopular, realizing that the voice of the majority is often not the best path and it is that reason why we live in a Republic rather than a Democracy.

A Republic: a state in which supreme power is held by the people and their elected representatives, and which has an elected or nominated president rather than a monarch.

A Democracy: government by the people; especially: rule of the majority.

The differences can be subtle, especially when viewing the differences from either a liberal or conservative perspective.  The major difference between the two forms of government is in process of who makes the rules and how those rules are applied.

When we view current political trends, we can easily surmise the differences in relation to the majority rule or a representative model.    The majority is very rarely effective in creating a workable consensus.  History has hundreds of examples of the majority following the voices of a few that inevitably leads that majority toward some unthinkable end.

A good example is the vigilante process of the old west.  “Hang um”.  No trial, no debate, no consideration other than one poor soul was caught and hung.  Guilt or innocence was never a factor, only the hot-blooded desire toward an unknown level of justice.

We are connected, and no individual can completely extricate himself from surrounding society. "No man is an island entire of itself; every man is a piece of the continent, a part of the main…” but the difference is that within a Republic the individual is the primary focus and the motivation for the liberties that we currently enjoy.  When we secure the rights of the one, we secure the rights of the many.

If you disenfranchise the individual those fundamental rights of the many are subject to change based on the needs of the majority.  The individual rights must be held to a higher standard for the rights of the many to be achieved.  There can be no group rights without individuals’ rights.  Group rights are unattainable and are, open to interpretation and change based on the groups involved.  It is impossible to secure rights and privileges for groups without those groups gaining privilege over individuals or other groups.

Trump is unpopular with many, but is he wrong?  Were our Founding Fathers popular during their time?  That depends on who was asked and the political ideology of who was asking.  To the British, George Washington was a traitor, Thomas Jefferson a renegade and the other “Freedom Fighters” betrayers of the Imperial court of King George.

In the colonies our rights as individuals and as British Citizens were being ignored, the colonist were being taxed without representation, but at the time only a few were courageous enough to stand against the abuses of the British Government.

Martin Luther stood against the Catholic Church and started a revolution in religious freedom.

The Unknown Rebel at the 1989 Tiananmen Square Protest, he stood in front of the advancing Tank Guard in China. he was hidden by the crowd, his identity is still unknown.

Gandhi’s Salt March to Dandi.  His non-violent march opened the way toward India’s independence against the greatest world power at the time.

Rosa Parks, she simply but profoundly sat in the front of the bus, helping to further the cause of equality for all.

Galileo Galilei was willing to challenge the orthodoxy of the church through his own scientific discoveries.

Harriet Tubman escaped from slavery but returned on many dangerous missions to Maryland where she helped lead slaves to freedom.

Jesus Christ, Despite the opposition from the Roman Army and legal system and his own people he never deviated from his message of hope and faith.  His example was the impetus for global change.

Donald Trump is not in the same category as those mentioned above, but neither were those, mentioned above perceived positively by those in power or by the masses, during their lives.  Most of society was ignorant of the changes that were coming as a direct result of the actions taken.  It is very rare for the “general public” to perceive the events occurring within the same context prior to history defining the events as historical or heroic.  It is also rare for the hero of an event to predict the outcomes of what they intend to do, leaving the entire process of heroism squarely as an afterthought of what was done.

A hero is then nothing more than a person who acts in a constructive, logical and positive way, many times against the norm of society.  Many of us are heroes, most are forgotten.  It is only through the perception of history that an individual becomes heroic and the deeds or actions taken in defiance of the norm becomes clear.

You may not like Trump, you may despise him and what he does.  When Trump was elected he made promises.  He has worked toward those promises and has delivered on those promises despite the overwhelming media castigation's and the Democrats ever-changing onslaught and varied tactics to undermine not only his policies but his life, his career, his family and everything and everyone connected to him.

There is no way to know if history will favor what he is doing and into what category of leader he will be remembered.  But we do know that those in power are extremely volatile and capricious as evidenced in how they treated John McCain.  He was a hero, then he ran for President and he was crucified and castigated and now he is the hero once again.

Can we really trust those who fail to show any consistency and change their ideology like the shifting sands of the ocean?  Both Republicans and Democrats fall prey to the politics of power.  Trump is hated by both and despised by those in power.  Perhaps that’s all we need to know about the man who is obviously kicking up a storm.
Posted by politicaldad at 8:07 PM