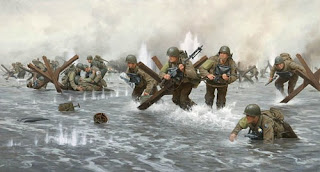 “D” day is quickly becoming a forgotten event.  If you ask anyone under 30 you will be hard pressed to get a clear understanding of the sacrifices that were endured by our fathers and grandfathers during this day June the 6rth 1944.


Thousands died trying to establish a beachhead that would be the beginning of the end for Nazi Germany and their goal of world domination.  It took 350,000 troops landing on 5 beaches to establish the foundation in which the allied nations could forge an attack against the Germans.


The men who died all had dreams and lives that they gave up in order to fight for a greater cause.  For their lives lost I am grateful and will ever be grateful for their sacrifice.  There dreams were cut short because of what they chose to do, our dreams are often cut short for other reasons.


I think it is understood that most of our expectations never see the level of clarity that initiated the dream.  Children and our youth have unfettered dreams that guide their paths toward adulthood.  Young adults may have started to see the stark reality that life very rarely follows our dreams or plans and as a we age; we are confident that whatever we thought we wanted will never take place.


The differences in perception vs reality may be part of the problem but when we delve into the randomness of life, we notice that those random acts may not be so random….


When we look at the word expectation, we learn that it is an “if” word.  If something happens than we can be happy.  But what if “if” never happens?  Are we then subject to the universal law of “never going to happen”?


I believe we all understand, to some degree that our lives are variable and changeable and when something doesn’t happen, we have options, other choices that can keep us going toward that often-elusive goal of happiness.


Perhaps we are thinking about our expectations all wrong.  An expectation is a final outcome and I think we have already established, or at least agreed to the premise that most of our expectations fall short of our dreams, meaning that either our dreams are wrong, or our process of perception is incorrect.


What we need, from my perspective, is the realization that there is an approximation of expectation rather than the unbending dream that when left unfinished crushes our lives and future dreams.  This approximation allows the mind to continue forward without the devastation of the loss of a dream not fulfilled.


Let’s use marriage as an example:  When a young couple gets married, or whatever you want to call it, their dreams are both very different but were alike enough to bring them together.  Problems arise, like they always do that start to shed light on the darkness of exacting dreams without compromise, or approximation.  There is no perfect relationship.  The older you get the more important that concept becomes.


A successful marriage is defined, by me, as one that can weather the loss of certain aspect of their personal dreams and continue to move forward because there are more important shared dreams between them.


Marriages that falter are those that fail to understand that in the approximation principle, which is:  Never loose sight of the ultimate goals of life and never forget to put aside aspects of your life as needed to obtain those most important goals.


That my friends is the 100,000-dollar question.  It is supposed to say 64,000 but with inflation and the value of the dollar …OK, I know, side tracked, I don’t really know what is most important, I mean I have my beliefs and my answers for me but you have to answer that question for yourself.


Let’s put it this way, if you wanted a healthy and fulfilling marriage, then, what are you doing to make it that way?  What sacrifices are you willing to endure in order to get what you really want?


My only advice is that we start to modify the way we dream.  We develop the ability to be grateful for partial successes toward our dreams and learn to reshape our dreams and goals to fit our reality. We need to understand that when we have a focus outside of ourselves then and only then can our dreams be fulfilled.  Then we will have chosen our Normandy landing and we can be numbered with those that we call the Greatest Generation.


At least that’s what I think…

Posted by politicaldad at 3:41 PM