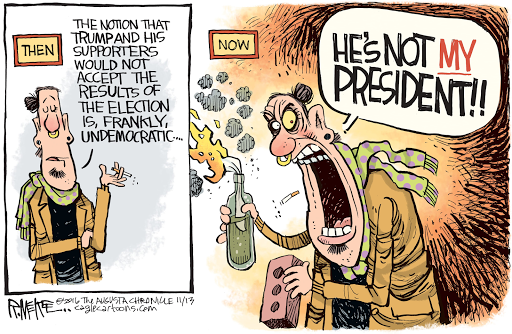 As we get close to this election, the madness of excitement is spilling over into the vats of anger and despair, especially for those on the Left.  What I don’t understand is the width of our differences.  We are all human, we all eat and sleep, strive to work and relax but the Left has this irrational fear of who we are and what we are trying to preserve, while the Left wants to change everything;  like Obama said We are five days away from fundamentally transforming the United States of America.”   But, change it into what?  It’s that unknown that scares me.

They act as if they fear us and are lashing out, in a desperate attempt to save their lives.  They fear me because I have different beliefs than they do.  I am a conservative who values morals; I like law and order and support the police.  I know that many Democrats want those things as well but it’s the loud and obnoxious Leftists that are vying for those radical changes and they seem to have the voice for all in the party.

They fear me.  That, in itself, is a strange emotion to have to deal with.  Why would anyone fear me?  I’m getting older, I don’t get as mad as I used to,  and when I did, it really wasn’t that often, no reason to fear me over that.  I still work hard, not as hard as I used to but still harder than many.  Maybe they fear me over my work ethic?  I doubt that, since many of those who exhibit these hyper- emotionally charged, reactions do not work or dislike the fact that they have to work.

I like the new Supreme Court Justice; she is perfect for the job.  They can’t fear me over that, I had nothing to do with that, even if I agree with Trump’s pick.  I guess that follows my law and order thing, so, maybe they fear those who want to take their “freedoms” away, even if their freedoms are not truly free.  They don’t understand that being able to do whatever you want, without regard to others or consequences is never free, it’s just wanton chaos.  And that chaos unchecked would morph into anarchy, with the strong rising to control the masses, leading to subversive rules and dictates that curb the freedoms of all except for the few at the top.  Why can’t they see that?

I guess what bothers me is that they don’t get it.  They want socialism; they support Marxism, do they not think about how they will be treated under an oppressive regime?  Or have they adopted a selfish attitude regarding the truth of Communism and the relationships of their ideology within these systems that promote murder and mayhem?  Just a side note:  Under Communism and Socialism they estimate, they have put over 200 million people to death and many just because they thought differently than the all-powerful State.  But, if they don’t have to work, or they get free stuff, it really doesn’t matter who is in control.

When you look at the news, you see two groups that follow certain patterns of behavior.      Group 1,  reacts strongly to suppress the options of others.  Case in point:  University professors who demand that other professors and staff conform to their view of life.  Group 1, also riots and destroys indiscriminately, forcing others to abandoned their purpose of a fight to preserve it.

Group 2, is more moderate in their expressiveness, allowing others to believe differently as long as they do so under the law.  They are law-abiding,   conscientious, they truly do care about others.  This is the group that gives to charity, volunteers, and steps up when needed.

I am in group 2, and I think that is why they fear me.  I am different from the way they are; I think differently, have different goals and objectives and worst of all, I want to live under the Constitutional Republic that our Founding Fathers formed for us; they do not want that and are determined to destroy what we have.

They may act as they fear me but in truth, they do not fear, their actions are a derivative of anger and disdain, they are bold, relentless, and unforgiving.    They will continue to shout and riot, destroy, and breed chaos until they are STOPPED.

We can either continue to shrink away from their assaults and attacks or we can stand tall and force the issues of goodness and forgiveness and charity under the law until they have no fight left.  If we fail in this, we fail completely.

This election is perhaps the harbinger of things to come.  Either we stay the course with Trump, help him in his fight to drain the swamp, refuse to give in to their demands, or we sit back and just let it happen.  Whatever happens, however, is not a choice I think we should adopt, as it will cause that fundamental change to America, leaving America, America in name only.

Posted by politicaldad at 6:26 PM No comments: