Regardless of which side you’re on, be it Conservative or Liberal, there is an overriding similarity between us; we both believe that there is rampant corruption, in government and in the world. 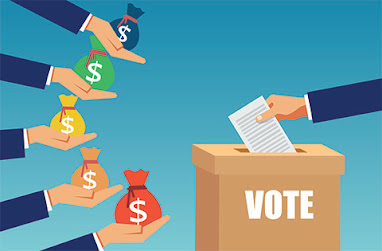 We have not determined the differences of who is behind that corruption, leaving us all pointing our fingers toward each other.  The question that must be asked is:  Are most people corrupt?   By themselves, are individual’s corrupt, or do they only become corrupted when they succumb to the forces put upon them by others?

Corruption is “dishonest or fraudulent conduct by those in power, typically involving bribery”.  I would add for the purpose of amassing power or control over others to that definition since the power to control others seems to be a more fundamental purpose.

“Everyone has a Price” suggesting that everyone is susceptible to being corrupted if the price is right.  To some extent, some people will lower their standards if they achieve what they believe to be beyond their ability or power, even if that decision has deleterious effects on others.  Those who chose those decisions are then more corrupted than those who do not.

Perhaps most of us are corruptible, but only to a point.  When we get an unobstructed view of our actions and the consequences of those choices, we invariably feel the guilt associated with those decisions or thoughts, that is a good thing, it is not good to ignore those feelings.

Our problem today is that I and many like me look at those who favor liberalism and think, “the end justifies the means”, meaning that anything is acceptable to the left if they achieve their goals.  On the flip side, Liberals probably have the same bias.  Are we both wrong?  Is one side more wrong than the other?  Are liberals more corruptible than conservatives, or is it the other way around?  How do we establish the truth of these allegations for both sides of the ideological spectrum?

There has to be a right way and a wrong way.  One side or the other is more corruptible than the other, but when your viewing life through the lens of that ideology the view toward the other side is so clouded and obscured by our own view that it is impossible to justify the logic amid the chaos.

In the definition of Corruption, it states that only those in power can be corrupt, but when a government is corrupt, the citizens soon follow and become corrupt.   Not all fall prey to the corruption above but it is very much like the trickle-down approach, Corruption breeds more corruption, which then normalizes corruption to where it becomes normal.

Despite who is more corrupt, the Right or the Left, the only way to disengage your lives from that negative normalization is to eschew all forms of corruption, in all its forms and from every avenue that enters our homes, our businesses, and our personal lives.  That means we need to act honorably and faithfully towards others.

We need to be honest and respectful, compassionate, with empathy and understanding to others different from us.  Only then will we be able to recognize the tendrils of corruption and the puppet masters that attempt to control our lives, our freedoms, and our liberties.  Only then will we be able to see, eye to eye, and work together in building a better life, a free life, a life of joy and happiness, peace, and freedom.

Belief in God, is to me, a fundamental principle of how to fight corruption.  Without God, the motivation for curbing “the end justifies the means” philosophy becomes lost to our souls, leaving a gaping hole where Faith used to live.

The alternative will be exactly what we have now but with no chance of change and no power to enact any changes.  We will be slaves to those above.

I Will Never Be a Slave!

Posted by politicaldad at 3:32 PM