Just to be clear: 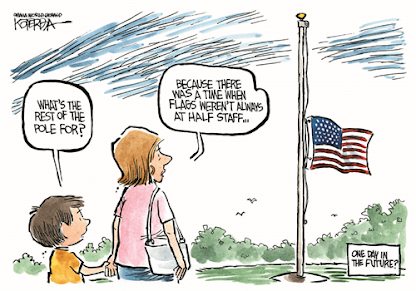 FLYING THE FLAG AT HALF-STAFF: The pertinent section of the Flag Code says, "By order of the President, the flag shall be flown at half-staff upon the death of principal figures of the United States Government and the Governor of a State, territory, or possession, as a mark of respect to their memory.

I am not trying to discount the tragedy of the Atlanta massage killings, by minimizing the horror and the deaths of those involved by the 21-year-old Robert Aaron Long, who was White and was most likely crazy out of his mind.  This was an unmitigated news event, but, is what he did pertinent to the above flag code to merit lowering the flags of all federal buildings to half staff? NO!

Most, I am sure, will simply say, “get over it, who cares if President Biden lowers the flags as a tribute?”

The issue here is not about the flags per se; this is about the rule of law, the rules in general, the traditions of our country, and the abilities we have given to some to circumvent every tradition of our American Culture.

We obviously have a Flag Code, it’s printed in black and white and that code was instituted for reasons that have served us well.  President Biden or his staff/caretakers have decided that the “Flag Code” should be circumvented and ignored. Again you may say, “So what? It’s just an obscure code of no importance”.

But, when taken into the context of everything else that has happened in the last few years, this obscure Code demonstrates the mendaciousness of those in charge to alter the truth, change the rules, obscure the traditions, and as President Obama famously said, “We are five days away from fundamentally transforming the United States of America.”

I am not trying to put words in your mouth, or errant thoughts into your mind, not because I don’t want to, but because that is a very difficult thing to accomplish, or is it? This is very much like the proverbial boiled frog. If you start the boiling process with the heat turned down the poor unsuspecting frog never realizes he is getting boiled. So it is with the slow but methodical methods of changes that are upon us now.

Since the election of Obama in 2008, this country has changed fundamentally. Our schools now openly teach seditious lessons. The Buffalo school district is teaching BLM propaganda to elementary students, adopting a curriculum, written and supported by the BLM.

From that curriculum, they teach the Marxist philosophy that diminishes the Family Unit and replaces it with devotion to the State, not America, not the United States of America but a “fundamentally transformed…” version of America, an America in name only.

Their goal is to destroy our rights, our privileges, and our constitutionally based laws with Marxist ideologically motivated rules.

This is not solely about flying the flag at half staff, that is only one aspect of the fundamental changes that are occurring and the changes that will continue to alter what we used to have into something unrecognizable from the God-given Constitution.

I personally think that stopping these changes is worth dying for, but I also believe that our first priority is to our God. Obey his laws, obey his words and He will guide us through this mess, one way or another.

Posted by politicaldad at 9:43 AM

Email ThisBlogThis!Share to TwitterShare to FacebookShare to Pinterest
Labels: flags, half staff, incrimental