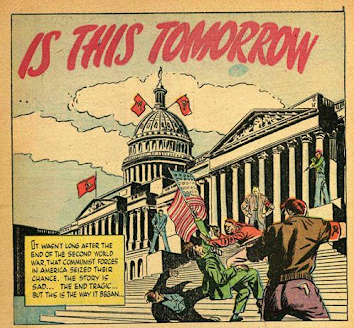 This may be one of those preachy, self-righteous posts that everyone hates and it might not...We are not just in a battle for our rights; we are in a war for our souls and the soul of our country as it was founded. Even if you have doubts regarding the validity of your soul or an afterlife the waging battles of this war are all-encompassing.

There are instances throughout history when great wars were fought and millions of people were unaware of those wars. Thousands could die, hundreds of thousands and most of the world may not have known or cared to know. When you look back into the eons of time, think about the civilizations that are gone and forgotten. Think of the wars in Europe in the 5th century and the millions who never knew of the conflicts in America or in Japan or in the undiscovered islands of the sea. There is a war all around us and most of the world is unaware of the struggle.

Incremental changes in how we live often go unnoticed until one day we look around and see a different country or city, we see the same faces but the expressions have changed. We were unaware of the subtle battles that at the time, were ignored. We are at war but most of us fail to see the enemy.

Germany in the 1930s gives an outstanding example of those unseen battles and unknowing public following the changes, just living with the orders, cooperating with the system until that system overruns logical mind and upsets the reality of the past. You open your eyes and what you see is not what you believed could ever happen. Venezuela is another good example.

We all have a religious belief, that belief depends on what we chose to follow. One definition of religion is a pursuit or interest to which someone ascribes supreme importance. Under this definition, atheists can be religious just as those who subscribe to a supreme being. Being religious is essentially someone who follows a strict code of conduct, that conduct does not have to be good, it can be evil as well.

I understand I am expanding the definition of religion but in order to understand the motivations of those who vie for power and control over all else the word, religion or fanatical comes to mind. It is those single-minded and zealous attributes that drive some to their view of perfection, understanding what they mean by perfection is perhaps the biggest problem in diagnosing the issues that face all of us today. Perfection in the minds of a Communist is total control of all aspects of the lives of others.

The war that we are engaged in, is a war of semantics. It is a war of subtlety and degrees, where we used to believe in something that we are now told is insensitive or even immoral.  Marriage is a good example. We used to believe, society, in general, believed that marriage was a contract, a mostly religious contract between a man and a woman. Now it is not.

We held up the basic right of speech as a stalwart function of our inalienable position as a free country, but now it is under assault and is no longer inalienable and has come under the condemnation as a standard of practice in judging another’s worthiness within an ever-changing paradigm of rules and laws based on the spurious emotions of the special interest, whatever that is supposed to mean.

We are at war with an enemy that is determined to destroy not only our ability to speak but our fundamental morality and our understanding of what is moral and what is not. We have entered a new dominion that is daily trying to change who we think we are into what others say we should be. Through, their subtle manipulations they have successfully changed how we think, how we act, what we should expect and in the process, they have changes who we are into what they want us to be.

The past unknown wars or campaigns are inconsequential to the realities of our world today, but they were not inconsequential to those who lived during those wars. We may think that because it is in the past, it can be forgotten and minimized, but, it is those lessons of the past that will support our current fight today. That is the reason for the call to destroy our past, simply because without our past the future is up for grabs, it can be rewritten, recreated, and instituted in any way those in power mandate.

Regardless if we are people of faith or not, this world is changing. We need to understand the definition of morality and comprehend that any moral rules, any level of morality needs to have a foundational cause. I believe God is that foundation. Why do we not steal from others? Why is it we eschew murder or other understood evils, why has man developed the moral codes we hold dear? The answer in my mind is that there is a Supreme Being and in His wisdom, He gave us that understanding.

This is what the war is all about, we are forsaking our Devine understanding for a secular, profane, and limited, less strenuous agreement for our lives and instead, seek for those once eternal truths from the mouths of snakes and vipers.

We can only win this war if we win it individually first. That is the strategy that the left will never understand. As we look to God for His support, He will grant unto us the means and the will to accomplish His ways.

OK, that was a bit preachy but without being excessively preachy you may want to ask yourselves, why do you want morality and fairness and honesty? Your answer may include God or it may be your desire to be good, knowing that if your good, others will likewise be good, creating a good place to live filled with good people and just laws...Etc...

Posted by politicaldad at 9:12 AM