Many are called but few are able 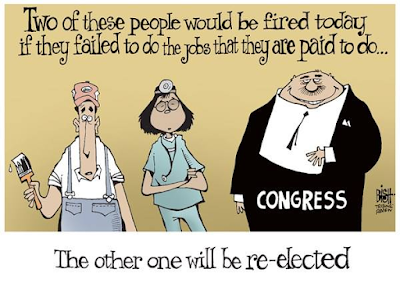 When I think seriously about those who are Democrats and those who are Republicans, I am truly stymied by the similarities of both, especially with those who serve us in Congress.

Being a politician is a person who is professionally involved in politics, especially as a holder of or a candidate for an elected office.

When you consider yourself a “professional politician” then the idea of service to others, specifically your constituents, becomes problematic. Those in office often disregard the idea of service in order to maintain one’s professionalism.  Elections become vastly more important than doing what’s right. The singular idea of “staying in office” trump’s (no pun intended) the very notion of being a Statesman, defined as a wise, skillful, and respected political leader.

I am naturally dubious at those who spend their lives in political leadership. Regardless of their ideology, the long-term and “professional” status only leads to corruption and incompetence and reminds me of the following.

The Peter Principle states that a person who is competent at their job will earn a promotion to a position that requires different skills. If the promoted person lacks the skills required for the new role, they will be incompetent at the new level, and will not be promoted again.[1] If the person is competent in the new role, they will be promoted again and will continue to be promoted until reaching a level at which they are incompetent. Being incompetent, the individual will not qualify for promotion again, and so will remain stuck at this "Final Placement" or "Peter's Plateau."

This principle applies equally to all sides of the political spectrum and most areas of life, but in politics, the effects can be devastatingly destructive. For many, political office, especially National Politics is the zenith of achievement, but very few consider the reality of their inability to serve effectively and are solely focused on getting elected and then remaining in office to stay in office, regardless of their effectiveness.

There is a reason politicians have a 33% approval rating. That rating is an across-the-board average of all politicians in all parties.  I think it's safe to say that the reason for their disapproval is their obvious inability to perform their duties as outlined in the Constitution and expected by the people who vote them into office.

The above is obvious. The problem is, and again this is obvious, we the people cannot elect competent people to serve our country's needs. Therein lies the ideological issue. Regardless of the obviousness of the above, it is only salient if we pursue the truths written in our government's charter, the Constitution.

Most do not understand the Constitution, most have never read it and many profess, ignorantly, to demand alterations or addition to it. Many want to expunge it from existence, replacing the constitution with open-ended and morally relativistic doctrine that allows anything for anyone.

In order to alter the above, we would have to alter the inevitable ignorance of those who are allowed to vote. That by the way includes almost everyone who can breathe and some that do not. If any of you have any suggestions on how to accomplish that monumental task, I’m listening….

Posted by politicaldad at 10:35 AM