The Reality of Race Relations 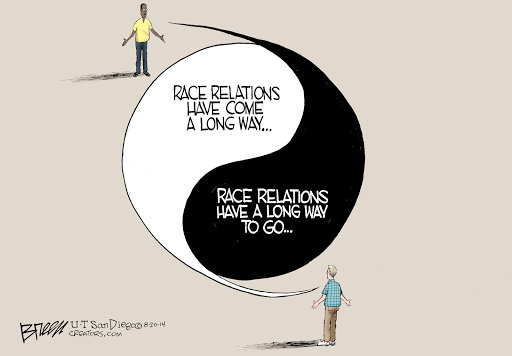 Reality, it seems, is not that real, at least not for a percentage of the population.  So many are out of touch with reality that they claim that they have their own, distinctive form that overshadows and has precedents over the scientific data and statistical measures that are not only quantifiable but verifiable as well.

We all know that the media can manipulate statistics, but when asked if blacks were more likely to die from a police encounter or from a traffic accident, most respondents, both black and white believed that they were more at risk of dying when stopped by police.

241 African Americans were shot by the police and killed in 2020.  That number included all age groups and all incidents, including individuals killed during criminal behavior.  https://www.statista.com

5,432 traffic deaths occurred within the black community in 2002,  I could not find more relevant information but the patterns are similar over the years.

In an article entitled, “The Myth of Systemic Police Racism” WSJ, by Heather Mac Donald, she looks at the statistics and shows the relationship of public opinion in relation to statistics, they don’t match. The incidents of racial animus are far less than reported in the Media.

The incidence of systemic racism is RARE and has been Rare, for years. The issue is in how singular events are reported as widespread.  Statistically and sociologically race relations have never been better.  If you doubt what I report, I challenge you to look at the statistics, look at the numbers, look at the patterns of how we generally interact with each other and you should see, I say “should” because there are some who will refuse to see the reality even with the overwhelming evidence provided.

There is a pattern that should be considered.  When the media latches onto a story or an event the rise of irrational behaviors can cause a change in society's illogical and groundless opinions.  These usually occur around elections and are almost always promoted by the Left and their believers.

I use the word believers because their actions are no less fervent than those who believe in a religious cause or purpose.

Let me be clear about a few things.  There is racism, there is hate and there is discord in all societies.  But when you take the totality of our advances away from slavery, when you include the intent and actual words of our founding documents, and when you include the relative rapidity of our abandoning slavery of blacks, as a whole, then you can start to see the overwhelming progress of this Country toward the idea that all men are created equal.

In general, most Americans are good, honest, hard-working individuals who eschew the thought of mistreating another, regardless of skin color.  We used to value our families and our rights and we looked at our flag with a sense of honor.  We were kind to each other and went out of our way to help others, regardless of skin color, religious belief, or political ideology.

We used to...That is changing.  The Media, Social Media is changing us.  It is infecting us with its lies, its hyperbolic ideas, and notions.  I don’t understand why or who really gains but our current level of race relations is not systemic; it is media-driven to sell time, papers, viewers.  They understand that good news is not as profitable as bad news, and we are awash in bad news.

It’s your choice, but if you listen to the bad news and fail to do your own research, it will adversely affect you.

Posted by politicaldad at 6:34 PM