Hitler the Socialist vs Russian Totalitarianism 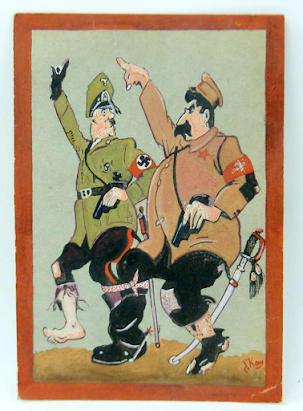 A point of clarification to all those who proclaim to think logically.

When you take a logical look at the evil in the world there are certain commonalities. Regardless of your definition of the word EVIL, the understanding that bad things happen to good people by BAD people is a given. If we have an issue with the basic premise, then move along.

There are three areas that need to be examined when attempting to designate good government styles with those that are not good. Please keep in mind that these suggestions are variable, but within the three areas you should be able to see the pattern that creates a negative despotic pattern vs a positive Democratic pattern of governance.

1. The first is the loss of liberty and self-governess. One of the basic tenets of socialism is the desire to control and manage the lives of their communities and countries.

2. Second is the willingness to use force to enforce those tenets.

3. The third is the universal process of division toward control and power.

There are other subcategories but the three stated above outline the fundamental socialist ideology. When comparing socialist regimes of the past and present, each of these is clearly in evidence.

Call it totalitarian, autocratic, dictatorial, Nazism, or Stalinist, the same rules apply and their means to the end are the same. Hitler used racial divisionist tactics to extinguish 6,000,000 Jews, Stalin purged nearly 2,000,000 while the Khmer Rouge killed another 2,000,000, all in the name of gaining control.

This is not a left or right issue, but it is an issue of Conservative vs Liberal. Hitler enjoyed corresponding with Stalin and regardless of how he used the propaganda for his end-result was to limit liberties, divide his people and control them, just like all the other socialists that have attempted to kill our free will and choice. If you cannot see the similarities between Stalin and Hitler, or between Maduro and the current leftist Democrats in Congress, then you are indeed blinded by the same illogical and hateful motivations that led to the deaths of over 20,000,000 souls around the globe in the 20th century.

As we look closely at the efforts of our own two-party system, it is clear that both are motivated by self-interest and greed. But as we look more closely at their rationale, we begin to see the similarities of earlier attempts toward domination and control.  Keep in mind, it was us that elected them and it is us who keeps them in office; it is therefore up to us to change who serves our interests.

This may be difficult for some, but when taken into context, including the history of both parties, which in your mind attempts to accept the constitutional mandates of our laws and freedoms and which of the two moves toward abandoning those precepts?

Which of the two parties (keep in mind that both are self-serving and selfish in their desire to stay in office) creates a greater risk of dividing the nation? This is the most difficult to ascertain, primarily because of the current rhetoric and hyperbole-infused media that continues to stoke the fires of fear, discord, and distrust. But not unlike what our Media does, Hitler started spreading lies about the Jews. They started to divide the country and reinforce the need for those divisions.

Their Civil Rights were taken away and millions lost their lives as a result.

Now, our Media and some leaders are dividing us along racial lines. The Right vs the Left, the Global Deniers vs the science. Race and Gender, White Privilege vs Black Pride, to name but a few.

We are on the path toward chaos. Our good intentions will not save us from those who wish to enslave us. We need to rethink and reconsider the path we are on as a country. We are sliding inexorably toward Socialism and most it seems are more than willing to let it come. If you are a Democrat, please reconsider your views, your priorities and reexamine your motivations in relation to the inevitable path that I have outlined.

Feel free to call me an Alarmist, a scaremonger, or a fatalist, but I assure you that my motivations are purely optimistic. I believe in our system of Government, even if our Government has failed us. I believe in the Constitution, even if that Constitution has been marginalized. We are all Americans; Let’s start acting like it.

Evil flourishes because good men do nothing.

Posted by politicaldad at 11:04 AM