The Inevitable Crash of Bureaucracy and the end of America. 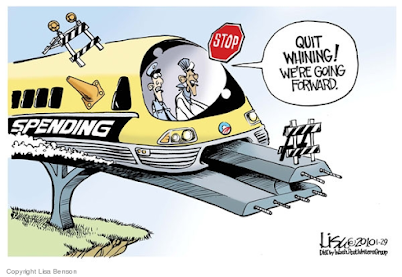 While visiting England in 1976 I was sitting on a bus, on the lower deck, and an old man sat down in the spot next to mine. He looked at me for a long 30 seconds, his eyes unblinking, red, and tired-looking. I tried to hold his gaze, but I had to blink, and then with a wry smile his eyes blinked and with feeling in his voice he said, “There is nothing so great as a well-conceived folly”

I gave him a quizzical look and stammered out a polite thank you, but he was already on the move to his next objective. For years I have kept that statement in my mind, often wondering, why he sat next to me to impart those words just to leave. It was only the ramblings of an old, an addled man, but, thinking back he was clear of thought and prophetic. I not only remembered the words but now I am understanding their meaning.

Perhaps it’s because I am getting older, but the meaning of this phrase has coalesced in my mind. As we age, we see life in the frame of what was, rather than what it will be. It is the ability to look back that expands our perspective of what was while integrating our lives to sharpen the thoughts of the past. We reach a level of clarity and focus our attention on what aspects of our lives matter and separate the dreams of our youth with the wisdom and blessings of our experiences.

"... A well-conceived folly" is the same as purposeful foolishness. The examples of government spending trillions on foolish ideas, foolish programs are apparent and mind-boggling. The amount of planning required is often well-conceived and purposeful, intending to create a burden or obligation that promotes the idea of a bureaucracy so that it lives to sustain itself, at our expense.

Our current administration has doubled down its efforts to ensure that bureaucracy has a sustainable future in all that we do. It is obvious to even the most ardent of Liberals that President Biden has serious cognitive issues, related to his age and the pressures of his office, but the "government" continues to steamroll the ideas of socialism and our dependence on the State bureaucratic machine.

This is the foundation of Socialism and global Tyranny (a cruel, unreasonable, or arbitrary use of power or control.) The problem with me saying that is that the socialist believer actually believes their perspective. They think they are reasonable. What we need is a fresh way to measure the outcome of differing social-political movements. The problem with gauging one form of power over another comes down to the perception and ideology of the believer, so the only way to quantify one over the other has to be outcome-based, or through the study of the result of the entire economy, the people, their freedoms, free will and a score of other criteria that measures individual opportunity against governmental regulation.

There are specific reasons for promoting personal liberty and understanding its effects on society that occur when those individual liberties are replaced with societal needs, void of individual liberties. Ask yourself what good are freedoms if they are not available to you personally? Also, the overall precepts of freedom mandate that if freedom is the goal, then everyone must be equally available to access those freedoms, or by logical sequence the freedoms not given to some will eventually be taken from everyone.

There are serious concerns and problems with allowing everyone to exercise their rights of freedom, especially with those who only want to use those liberties to enhance their power over another. Can you say political exceptionalism?

The folly of our current state of politics is in the power imbalance between those that govern and those who do not. I am not suggesting that we convert to a purely democratic electorate, that would be a disaster. Our Founding Fathers understood the need for representation and hoped that the Republic would continue to flourish through the process of elections based not on popularity but principle and ability. We are a representative democracy that ensures that a less volatile electorate measures and tempers the ebbs and flows of popularity.

This folly continues in the rampant abuses of those in power with a stark difference between those in politics and those who are not. The politicians learned from Bill Clinton to hold their line, never admit or never give in, even if the accusations are true. At least Richard Nixon had the consciousness to resign when he was caught.

Morality, honor, integrity? Who cares, as long as you can keep your position of power. Since Clinton, the state of Morality has morphed into a relativistic notion of political expediency. If it keeps a politician in power, it is therefore moral... for them.

The well-conceived folly is the support for those behaviors and the silent acquiescence that allow those activities to continue and in many cases, expand. “There is nothing so great as the well-conceived folly” but only when it is surrounded by those who profit or benefit from it, and there are many who turn a blind eye for their piece of the pie.

I feel for the old man who sat next to me years ago. He saw a despicable time. He had the courage to speak out, but no one would listen, no one understood. Are we understanding now? Let’s hope it’s not too late…

Posted by politicaldad at 3:52 PM