Someone once said, “We have two political parties, the Evil and the Stupid.”

Depending on your ideology or lack of, that statement can probably apply to both the Democrats and the Republicans. 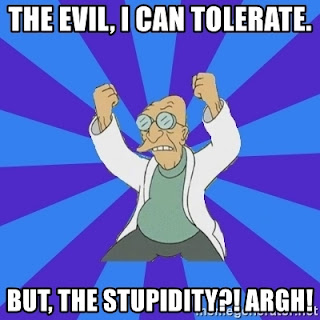 Within the State of California, I hope you're aware of the effort to recall Gaven Newsom, he is the Democratic Governor of California and the attempt is being made to remove him from office, that is what a recall is.

I am trying to be deliberate in my explanation for the simple reason that I don’t think the Democrats are the “stupid” party.  That moniker goes to the Republicans.  You may ask yourself, what is the difference between Evil and Stupid? Not much when you consider those who act and do Evil are really not much worse than those who are Stupid and allow Evil to flourish.

I was going to let you extrapolate, by yourself the logical conclusion from the revelation that the Republicans are the “STUPID” party but I think I should continue to be deliberate in my observations and explanations.

The above conclusions obviously come from my perspective, and just to let you know, my perspective is always correct...Anyway, I like to think it is.  The reality is in how we form a perspective, how do we draw conclusions and quantify in our minds a resolution to the choices that are presented?

Am I moving too fast?  The answer to the question of how is in how we process the information we receive.   When we fail to seek out the best information our conclusions are tainted and perception of what is right or wrong is also mitigated by our lack of information.

The often heard statement of “my truth is different than your truth” defies logic and destroys the very essence of truth and our search for those elusive principles.

The point I am trying to make is that even though we have to opposing parties vying for our support the above statement that one is evil and the other stupid has to be defined based on the act, the policies and the practices of those parties, not solely on how the MEDIA presents the information you receive.

I accept that the Republicans are monumentally STUPID.  They have proved that moronic stupidity over and over again and continue to exhibit those tendencies, with no evidence of learning.

The Democratic party has shown that they are the party of EVIL.  They have proved it through their policies that drive the individual into definable and controllable groups.  Their constant hypocritical actions show us their intent to shelter themselves from the laws they impose on the rest of us.  Their debauchery and callous disregard for the individual overshadows their rhetoric of racial Justice and individual rights. They are Evil in their intent, in their programs and in their designs to circumvent JUSTICE…

Today we VOTE and even now those votes have been marginalized.  Your Vote is essential, Every vote is needed and every person needs to VOTE, but before you vote, Really think to yourself, which of the two parties is EVIL or STUPID and which would you rather have leading your life?

When trying to decide which way to vote, think not about the party but the man, who is the best able to give you the freedoms and liberties promised by our Constitution….I should have left that last part out...What’s the Constitution have to do with it?

Posted by politicaldad at 10:08 AM