The Free Press or Fake News? 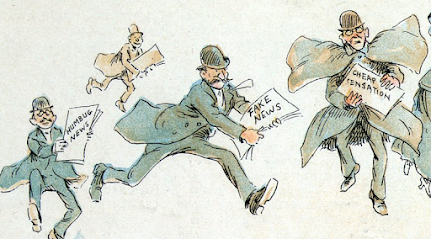 Yellow journalism is a tried and true method of ensuring devotion of the readers, viewers and listeners.

There is nothing more tantalizing than the sensational and shocking news that is printed or distributed to the masses.  With half truths, hyperbolized facts, deviated interviews and some outright lies, a simple story can become the next Headline or News Scoop.  Here are a few to consider:

Abraham Lincoln was a Woman

Nazi UFOs to Attack US

Is Your Cat from Mars?

Many of the above and there are thousands more, come from the Tabloids.  You know those headlines in the supermarket check out lane?  You read them and shake your head in disgust and then you wonder, was Abraham Lincoln a woman, did that Jesus Action Figure really heal someone?

Here are a few more:

Chain-smoker Kicks 30-year Habit … Then Chokes to Death on Wad of Nicotine Gum!

As you can easily tell, I am simply trying to fill up space, create an interesting read by just listing the weird and sensational news headlines.  Not exactly.

In 1938 the world was listening to the Radio and at 8:00 p.m. on Sunday, October 30, Halloween night, Orson Welles started the broadcast with an adaptation of H. G. Wells’s Novel, the War of the Worlds, written in 1898.

The public that heard the broadcast were shocked and mystified by the events being “reported” and some panicked, some were scared and many were left questioning.

Let’s go back to John Adams, you know, the second President of the United States, the one right after George Washington, the General who helped win our independence from England…The Revolutionary War?

Writing in the section where the French philosopher predicted that a free press would advance knowledge and create a more informed public, Adams scoffed. “There has been more new error propagated by the press in the last ten years than in an hundred years before 1798,” he wrote at the time.  Smithsonian

“A lot of things we talk about today we talk about as unprecedented,” says Carter. “It’s important to look back and see how these same concerns and issues have been raised at many points throughout history.”

The problem with the press, or media today is that they are no different than they have always been.  They are first, a for-profit enterprise, they want to make money.  Some care about the truth, some will die for that truth, but most only want to make a name for themselves.

The publishers and Editors have an agenda.  That agenda is great, when you agree with it, but if you don’t agree then you are less likely to subscribe to the views of that paper, media-group or politician.

As we look at the “news”, when we look at the stories that are told to us, should we not consider the motivations of those reporting and then try our best to think critically about what it is we are being told to believe?

I know I have a bias.  I like to think that my filters are aligned with a more truthful view of what is right and what is wrong and that helps me to mitigate that bias along the lines of what I think the truth is or should be.  We are all the same in this regard.

If we want to follow truth, then we need to start looking at what we read, what we listen to and what we expect from those that report to us; they will not be concerned about the “truth”.

Truth is not a variable.  Truth does not change because you want it too.  One thing that we know for sure; Truth from our media is suspect, marginalized and often overtly untrue, ok, I’ll say it, FALSE.

Read and listen Carefully, our lives depend on it.

Posted by politicaldad at 9:22 AM