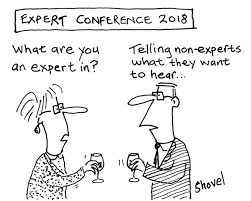 The word “expert” has been used more often in the past two years than perhaps anytime in its long history.  From my limited research of this word, (I am by no means an expert), the word is mentioned in 1 Chronicles 22:15 and specifically refers to those who were experts in their fields.

early 15c., "person wise through experience," from expert (adj.). The word reappeared 1825 in the legal sense, "person who, by virtue of special acquired knowledge or experience on a subject, presumably not within the knowledge of men generally, may testify in a court of justice to matters of opinion thereon, as distinguished from ordinary witnesses, who can in general testify only to facts" [Century Dictionary].

Today, it seems, as though that same word has taken on a much more political connotation and with it the ability to redefine those who would have been considered an “expert” into less than capable.

A good example of this trend is the Great Barrington Declaration.

This Declaration has been signed by 46,893 Medical Practitioners, 15,840 Medical and Health Professionals and 865,365 Concerned Citizens.    62,733 EXPERTS in the medical field have signed this Declaration that proposes that:

“The most compassionate approach that balances the risks and benefits of reaching herd immunity, is to allow those who are at minimal risk of death to live their lives normally to build up immunity to the virus through natural infection, while better protecting those who are at highest risk. We call this Focused Protection. “

Despite the almost 63,000 Experts who signed this document, the nations of this world have mostly ignored those experts in favor of “other experts” in a move to greatly diminish the rights, freedoms and liberties of citizens of various countries around the world.

The question of who is an Expert, and why should we listen to one Expert rather than another, or in this case 62,733 experts as opposed to 1, Anthony Foucci?

When we are faced with a mandated decision made by one or just a few the idea of expertise seems to fall precipitously and in the general direction of armature, ignorant, or even uninformed, but when you consider the differences in opinion based on the expertise of thousands compared to those opinions of a few, then we are left to assume a more notorious or malevolent motivation.

Are our Experts really utilizing their expertise for our good?  The fact that most of you have never heard of the Great Barrington Declaration should at least give you pause to consider the reasons why, despite the nearly I million signatures, that very little is known about this declaration.

I find it very disturbing that so many of us can be manipulated to such an extent as to redefine our parameters of what we used to believe about others' expertise and the wholesale move away from the norm of centuries to the newly promulgated shift toward a political definition of the word “expert”, that includes our subservience to the doctrine of propaganda rather than Wisdom of those that truly are experts.

We are quickly moving away from our constitutional premise of a representative body of elected, and dare I say it, experts, to guide us, and allowing the bureaucracy (to be run by desks)  or in other words not by those elected.  The elected come and go but the bureaucracy never changes.  That is where the real power is.

When the non-elected can make rules, define punishments or close businesses than the need for elections becomes a moot point.

Posted by politicaldad at 3:28 PM