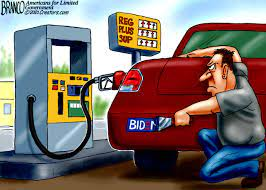 A whole lot of truth about gas prices, and to those that say: "the president doesn't set the price of gas"... pay close attention and maybe read it twice:

From a production worker in a refinery on the Gulf of Mexico:

"You've been lied to by the President and his phony cronies, but I want to set the record straight. I'm going to tell you the truth, so pay attention"....

1. There is enough recoverable crude oil within the continental US to supply current and projected future demand for 400+ years, and that's just the oil we know about. It doesn't account for future discoveries.

2. We do not need to import a SINGLE DROP of foreign crude oil. The domestic oil industry can easily meet, and even surpass domestic demand. We've done it before, and we can do it again. That's a fact...

5. We import foreign oil from countries that drill and produce it much cheaper than we're able to because they do not implement all of the environmental safeguards that we do. Their methods are FAR more destructive to the environment than ours are.

6. Every year, the federal government leases tracts of land to oil companies so they can explore on it for oil. If enough oil is found during exploration, the company can then apply for a drilling permit which allows them to drill a well. If no oil is found during exploration, or if the amount found is not enough to be profitable the lease expires without ever being drilled on. Leases that are active, but not being drilled on does NOT mean that oil companies are being lazy, or are trying to keep the oil for themselves, etc. etc. It means they've either explored the lease for oil and found nothing, or found oil but it's not enough to justify drilling for.

7. it’s not Russia's fault, or China's fault, or Ukraine, or India, or Venezuela, or Iran, or Bangladesh, or any other countries' fault as to why everything is so expensive right now. It's Joe Biden's fault, because he is suppressing the domestic oil industry for political gain.

EVERYTHING depends on crude oil... but you might not know that if you believe the lies that are being told about oil and the oil industry.

Posted by politicaldad at 8:45 AM No comments: 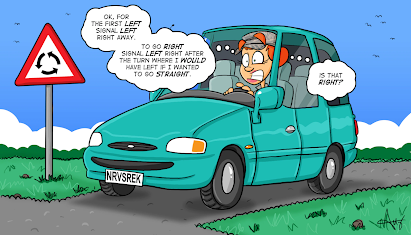 I was always a good driver, said the guy who has had his fair share of….I’ll let you fill in the blanks on this one. Like many of you, I have been driving for some time, since 1972, in one form or another, so I thought I could easily drive in England.

In late 1976, I actually passed the English Driving test, and I passed it the first time. It was very difficult, especially for the manual transmission version; it was brutal.  I, however, can not recall any issues in doing so, or while driving here.   This trip to the Emerald Isle has proved me wrong, not totally, but I must admit the current pressures from driving are intense, my blood pressure boils, and my anxiety levels are off the charts.

The passengers in the car are also affected negatively.  I can see them squirm and tense as they make involuntary spasms while their muscles contract in response to that inevitable collision that has not yet happened.

I knew the roads were narrow and windy; I understood that driving on the left side of the road was an expectation and that virtually everything about driving was the opposite of the way I am accustomed, except for the clutch, brake, and accelerator positioning.  The rest is completely different.

After we picked up the small Ford manual six-speed, I drove around the rental lot twice and thought “great, I got this”  I didn’t have it, in fact, as I entered the exit and proceeded through to the Boom Barrier nothing happened, the boom did nothing, it was supposed to rise and let me out.

I did not know of the problem until a very large bus filled with people pulled up to the boom facing my position.  I immediately put the car in reverse, but I kept moving forward, where was REVERSE? The bus driver was getting agitated, the crowds on the bus were getting impatient and I was just sitting there frantically trying to find the reverse.

To make matters worse, a young woman, maybe 25 pulled up on the proper side of the road and rolled down her window, and asked if we needed help.  My wife said yes, yes, a bit too frantically if you ask me, but I was desperate.  She didn’t just tell me what to do, she came over and got in and deftly engaged the reverse and moved the car behind hers, and then told me of the shift slide that allows reverse to be engaged.

Making it back to our flat was not uneventful, especially from my wife's perspective.  Driving on the left side of the road means that the driver, me, has to adjust to the relative position of said driver, again me, to the position of the lane, in other words, the car was on the left side of the road, but my position while driving was trying to position my body to a more “normal” right-hand configuration, meaning that I was dangerously close to the curb, parked cars, pedestrians, and every other vulnerable object on the left of my vehicle. Can you say NIGHTMARE?

Like I said above, I am a good driver, but being a good driver in one instance does not guarantee the same level of success in other instances.  My eyes, instincts, and muscle memory were all affected by the differences in the demands of driving on the left.

Driving in England is an amazing opportunity.  The sights are spectacular, so says my wife, I was too busy trying to avoid overly large busses and articulated Lorries, the ever-present bikers on bicycles, farm equipment, and did I say pedestrians, who falsely assumed I was a “good” driver?  I never had the chance to notice the rolling hills, the intense green fields, wooded areas, and the spectacular scenery that can only be found here, in England, all I could see was the ever-changing landscape of impending disaster and our eventual demise because of my lack of concentration.  UGH.

I guess what I’m trying to say is that when you look at something, someone through your set of perspectives, your expectations, and your patterns of life you, like me, cannot see the beauty of their lives, the struggles of their existence and the similarities of their cultures with your own.  It’s not until we walk in their shoes, sandals, or boots or in my case, learn to drive in their country that the true nature of what they are, and who they are, that we see we are more similar than different.

We are all HUMANS; we are virtually the same.  Prejudices are only a reflection of our own fears and hate regarding ourselves and the desire to control others around us.  We must be in control of those natural tendencies, look beyond what is simply natural, and strive for what is Devine.

Posted by politicaldad at 7:01 AM No comments: