The Natural Man, or is it just lazy? 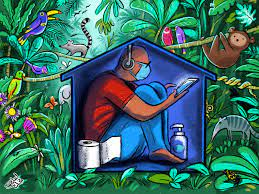 The Natural Man is trending of late, and unless I dare to offend, so is the Natural Woman.

We love nature, the beauty, and grandeur of untouched and unspoiled wildlife are awe-inspiring. Seeing the landscapes and scenery, the sunsets and sunrises are beyond words. There is nothing better for the soul than watching the sun rise or set from a clear vantage point.

Nature, in all its grandeur, is also cruel, vicious, and unforgiving. No one can deny the reality of life as we watch the brutality of animals hunting, stalking, and eating their prey or the heart-wrenching helplessness of a small creature in the grips of a loathsome predator. So often, it seems, we forget that animals have no morals, no conscious or guiding social construct to help them overcome their natural tendencies toward survival, nor the animal instincts that drive them to feed, mate, kill and consume, again, without constraint or guilt.

There are some examples of animal behaviors that show signs of a higher moral standard, but those examples are from mostly domesticated animals. Animals who have learned the importance of association. They understand the need to protect and have developed a sense of belonging, to the point of changing their animal instincts‌. And let us not forget the shared instincts of motherhood, that drives women and females of most of the animal kingdom toward diligence as they protect their young and help them ‌learn to survive.

We understand those differences and even accept those realities, as part of what nature is, but, what I think we are forgetting is that the Natural Man, (I will forgo the Natural Woman part, you all know what I mean) is not entirely an Animal.

We may act like animals. We may do horrendous things to each other, in our ruthless and unrestrained, heartless attempts to control others. We should also understand that, that humanity, that conscience, and guilt is still present within all of us, albeit suppressed in those who do unspeakable things to others of their kind, but of the billions who have lived on this earth, most, keep and attempt to grow that conscious. We ‌differ from the animals and have the expectation to rise above nature, not simply be driven in acquiescent to it.

Of the approximately 400 generations of life to date, man has always been more prone to following the rules and creating rules and guidelines than simply allowing the animal instincts to define his nature, but ‌we are now abandoning those historical and instinctual desires of order and structure for the supposed freedom of nature.

The defining words of Man and Woman are quickly becoming debased and obsolete. Children are not only encouraged, but they are being taught that sex and gender are nothing more than a fluid activity of choice based on whim and desire. The family is no longer the foundation of society and with that change comes the increasing instability of humanity.

There is a definite trend away from the order of life, by many who wish to have no order, no consistency, or stability. Our institutions used to support those foundational principles, but now, they have all turned away, not wanting to be associated, choosing instead to partner with the chaos for some supposed short-term gain in public approval, or profit.

We can easily see the chaos expanding in all areas of existence. From the before mentioned, self-induced, and societally supported dysphoria…

(rapid onset‌ of gender dysphoria, which has a 100-year historical basis, and included young boys exclusively, has now jumped from boys to girls in epidemic proportions in just under 10 years, (the numbers are staggeringly disturbing), fueled by the psychological society, schools, medical professionals, governments, not only supporting but teaching and encouraging these young girls to destroy their lives.)

… to a political environment that supports wholesale riots, changes simple words that have devastating effects on society, to the unthinkable raid on a former and popular President of the United States, based on a non-criminal statute.

Our finances, our economies, our livelihoods, and our commerce are all spiraling out of control. We are devolving away from our inherent humanity toward the baseless idea of nature being the controlling motivator of our lives. Take what you want. Do what you want and create yourself in the image of whatever you can dream of and in the process lose yourself, lose sacrifice your humanity and your self-worth.

Forsake the patterns of life, abandon the desire to become more than the sum of your parts, Man has rejected the god-given ability to pursue a life higher than nature; he now only wants to be a subject of the Natural Man, no divinity allowed, no higher purpose, no vaulted goals of life that help us obtain our humanity, we are nothing more than animals… Kill or be Killed, eat or be eaten. Live on the run, take what you can, when you can, you are nothing but an animal, except…. the animals I know are less dangerous than this new breed of creature we used to call MAN… or Woman…

Do we really have no concern over what our selfish choices of today will do to our tomorrows?

Posted by politicaldad at 10:20 AM