Where is your North Star ? 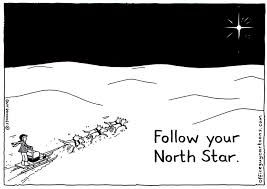 I have often wondered why I believe a certain way while others choose to believe in a different way. There are obviously many ways to believe and many methods to follow, but the area that I find the most confusing is the dogmatic, politically, and godly agnostic beliefs of those who openly despise and hate the traditionally religious.

Of course, there are those who are political and religious as suggested by the words above, but it seems, at least to me, that a growing number of those in the political arena, are no longer religious, again as suggested in the synonyms above. There are many who, like the Pharisees of old, put on a good show but cannot live by the principles that those who call themselves religious would naturally expect.

There is nothing new about this revelation, man has acted in his own best interest for as long as man has had the ability to think for himself. The troubling issue is not necessarily why they act like they do, but what they are allowing to happen because of who they are.

Most will agree, at least I hope most will agree that we are living in a time of unprecedented selfishness, a selfishness that leads many to act in horrific ways toward their fellow man.

Children’s Hospitals, previously places of hope and care for our youth, are now engaging in horrifying activities that directly harm the children they are charged with protecting and doing so in unalterable and atrocious ways. In the name of their beliefs, they are surgically altering the sex of both young boys and girls. They are removing and rearranging their private parts to proximate the sex of their choice at an age when children should not be able to choose, destroying the life and possibilities of all those who fall prey to these monsters.

The hospitals, the doctors, and the nurses of these institutions have devised a system of belief, based on profits, and excuse their behaviors behind words of feigned support that purposefully cloud the minds of both the child and their parents.

These once revered institutions have fallen for the political rhetoric of the day and are now in complete support of the transgender movement sweeping the country, refusing their Hippocratic oath of Do No Harm, for a religiously pursued doctrine introduced by the small but growing number of transgender lobbyist, who infect our society and demand the sacrifice of children on their alter of their unknown, unnamed and silent deity.

The religious Left have their sermons, they have their holy places, their places of worship, their priest, and parishioners. They have their missions and they have their followers.  Their ranks and memberships are growing and the list of those who have fallen into this religion are also those that can be sacrificed for their cause.

The same is true with abortion activists. They scream and cry over the right to choose while denying those same rights to the not yet born. With religious fervor, equalling. those of any devout Christian, or fanatical believer, they spew hate and discord toward all who fail to support their cause, their crusade to sway the public to their beliefs.

Political violence is also a member of this denomination. They castigated those who do not follow their commandments and adjudicated on the spot and as with conservatives who supported Trump; they are harassed and jailed.

They have labeled parents as a domestic terrorist for simply disagreeing with local school boards.

The Religious Left, raises money, outspending the opposing Republicans 3 to 1. They pass the collection plate and their followers gleefully fill the coffers for their church, knowing that the priests and priestesses will forward their cause, as stated by Barack Obama “We are five days away from fundamentally transforming the United States of America.”

I don’t mind change, good change is what we should all strive for.  Changing our lives, improving ourselves, and creating a better person for the express purpose of being a better servant to others. I am not a proponent of fundamental changes to the United States toward the changes I see now. We should all be worried about the changes over the last few years.

Where we once had liberty, we are now subjugated, forced to get a vaccine that doesn’t work. Where we once had free speech, our speech is now monitored, reviewed, and fact-checked.  Where we used to have borders, we have allowed close to 3 million illegal immigrants into our country. Where we once had a stable economy we have skyrocketing gas prices, falling stock and bonds, a weak dollar, and a world on the brink of war, and for what?

So a few can control the many.

We hold these truths to be self-evident, that all men are created equal, that they are endowed by their Creator with certain unalienable Rights, that among these are Life, Liberty and the pursuit of Happiness.--That to secure these rights, Governments are instituted among Men, deriving their just powers from the consent of the governed,

I have my own Religious beliefs, as do the majority of Americans.  I do not want to be Fundamentally changed, especially by a government that has forsaken their role as constituted without our Divinely inspired Constitution.

I believe in God; I believe in His Son Jesus Christ and I believe in His words.  I will not join, participate, or support this new Religion that is sacrificing our children, separating families, and taking away my Rights that were given to me BY GOD HIMSELF.

We are at war and I will fight for what is good, what is right and what is truth. My compass points North, to the stars above, to the God of the Heavens and this earth. My goal is to stay true to my God, there is no other way. No other North, no other truth than God, that’s my RELIGION.

Posted by politicaldad at 7:17 AM No comments: